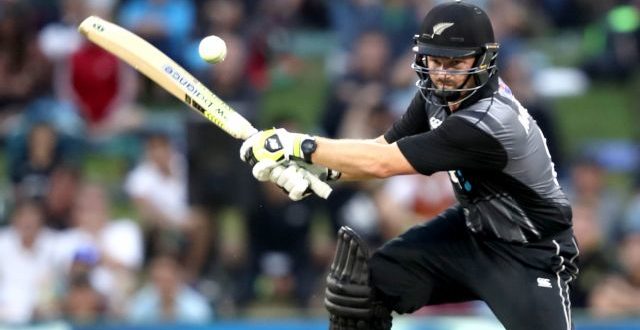 Colin Munro became the first batsman to make three centuries in T20 internationals as he laid the foundation for New Zealand’s battering of West Indies by 119 runs in their final match of the tour at Mount Maunganui. The left-handed opener followed up his two fifties from the previous games with a 53-ball 104 as the hosts swept the series 3-0. West Indies failed to register a single win on a New Zealand tour for the first time since 1999-00.

West Indies began much like they have begun all series – by feeding New Zealand everything they wanted. This time, Martin Guptill – who had made two single-digit scores previously – made use of the offerings too. He provided a scintillating start to the match, getting forward to the first ball and caressing an outswinger from Jerome Taylor wide of mid-off. He finished that over with an expert dab to beat short fine leg, and from there the carnage began.

Carlos Brathwaite entrusted his spinners with keeping New Zealand quiet in the Powerplay. Samuel Badree’s first ball was an early indicator of what was to come. The legspinner dropped one short and down the leg side, and Munro duly wafted it over the long leg boundary. He crunched Taylor over midwicket with a slog, and when Ashley Nurse replaced him from the other end, he welcomed him with boundaries on either side of extra-cover. By this point, he was set up to better his career boundary rate – he hit a four or six approximately once every five balls before this match – for the rest of his innings.

Guptill wasn’t as destructive, but he kept up the pace that allowed the openers to put up a century stand and get to their respective fifties inside ten overs. With the pitch offering nothing, West Indies’ bowling was reduced to offerings of straight balls at different paces. The spinners didn’t attempt to slow their pace down, and on the rare occasions that they tried it, Guptill had no problems hitting them through the line. The pain of conceding 51 runs in five overs of spin was momentarily alleviated when Brathwaite’s first over – the eighth of the innings – went for only seven runs. A West Indies bowler had finally avoided being hit for a boundary first ball.

But all of 36-year-old debutant Rayad Emrit’s experience couldn’t help him or West Indies keep that up. He started with two overpitched balls on the pads; Munro flicked the first one over square leg to bring up fifty, and carted the next over midwicket. It was more of the same for the rest of the innings. Brathwaite’ only conceded one boundary off the bat in his next over, but went for 22 anyway. Length balls kept coming into Munro and he kept putting them away, evidenced by a wagon wheel that showed 55 runs in the midwicket and long-on regions.

Guptill survived a caught-behind appeal in the 11th over, first on-field, and then on the review despite a mysterious disturbance on the audio check for the edge. It was against one of the few yorkers West Indies bowled, and it came from Nurse. Guptill edged Emrit to the keeper in the next over.

New Zealand managed a half-century stand for the second wicket, as a modified middle order added quick runs around Munro’s march towards a record hundred. Each of them managed to hit a six – Kane Williamson’s loft over long-on was the most handsome one of the innings – as New Zealand made 243, their highest score in T20Is.

West Indies’ propensity for poor starts seeped into their batting as well. Chadwick Walton chased Tim Southee‘s outswinger with hard hands and chipped one to cover first ball of the innings. Five balls later, Southee lifted a short ball up at Chris Gayle, trapping the batsman with his gloves covering his throat and his eyes looking at the floor; the ball lobbed up for wicketkeeper Tom Phillips and both openers were gone for ducks.

Rovman Powell was promoted to No. 4 to cover for Shai Hope, who had damaged a ligament in his right shoulder while diving in the field. The immediate effect of that change was Trent Boult going for 17 in a disastrous first over, in which he bowled back-to-back no-balls, followed by Southee conceding 19 to Andre Fletcher and Powell in his second over.

Williamson did what Brathwaite had done earlier, and brought Anaru Kitchen on to bowl his left-arm spin. He got one to straighten off the pitch and take the top-edge as Powell swiped across the line. Shimron Hetmyer began brightly, hitting Mitchell Santner for six next over, but was run out minutes later, Fletcher’s ball-watching causing just enough indecision to leave them both hopping aimlessly outside their creases.

The visitors threw in one final effort to come close to the target, hitting through the line like Munro and Guptill had as they monopolised the cover boundary to make 24 off the seven balls following Hetmyer’s wicket. The introduction of Ish Sodhi’s legspin put the brakes on that streak. He went for just two off his first over, and bowled Fletcher with a googly when he heaved at him to relieve the pressure created by a tight over from Santner at the other end. The end was swift from there on, with West Indies folding in the 17th over. Boult and Southee dipped into the West Indies wicket pool for one last time as New Zealand completed their biggest T20 win.