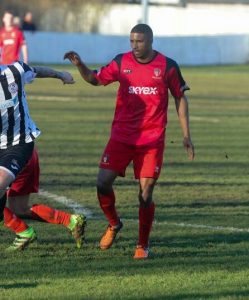 Melanius Danny Mullarkey opened the scoring for Team Saint Lucia as they got their 2017 Windward Islands Football Association (WIFA) Men’s Tournament campaign underway with a win over St. Vincent and the Grenadines on Wednesday evening at the Kirani James Stadium in St. George’s, Grenada.

The second-half marker from the England-based defender, who has family from both Soufriere and central Castries, was the first of two for Saint Lucia. The second came through captain, Kurt Frederick, before the defending champions pulled one back to make the final score 2-1 in favour of Saint Lucia.

The team with the youngest squad in the five-team tournament is now in pole position, after hosts Grenada were held to a draw by Dominica. Barbados is set to get its campaign underway on Friday evening, when the second round of matches kicks off.

Mullarkey rejoins the national team after having made his debut in 2015 at the age of 23.

Speaking just before the team left for Grenada last Monday, he said his previous stint in national colours helped him grow as a professional, whilst he feels his increased professional experience can bring a lot to the national team.

“I had such a tremendous spell in the last national team fixtures, one being the Windward Islands Tournament, and the other being The World Cup Qualifiers. Playing in those games gave me a massive opportunity to showcase my strengths and review my weaknesses. Moreover, it allowed me to focus on what I contributed to the team.

“After the World Cup Qualifier in 2015, I gained beneficial exposure to another dimension of the world of football through negotiating contracts with Cork City FC in the Airtricity League of Ireland. Despite experiencing a short period of time training, the lessons I learnt were so essential to my progression, especially in their Champions League qualification matches.

“Through experiencing positions at a few football clubs in the U.K. such as Dumbarton FC, Daventry FC, and Hayes and Yeading FC, I am really excited to represent Saint Lucia – a place which I am always proud to call my own country. I am excited to be back and ready for the tournament. Being a high-scoring defender I am 100% confident that the team will get the best of me.”