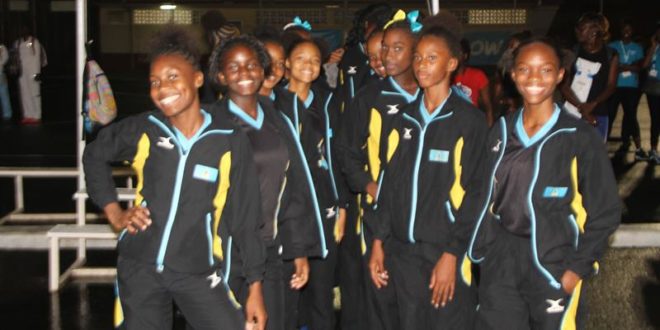 Of their six games, Saint Lucia won four, drew one with Barbados and lost one game to Jamaica. The team recorded 192 goals with 125 against, a goal difference of 67. Netballer of the year Megan Nestor and Dasha Eugene were part of the squad and the only two players returning from the 2016 tournament which was held in Barbados, where Saint Lucia placed fourth.

Sen. Hon. Fortuna Belrose, Minister in the Ministry of Youth Development, Culture and Local Government, did the honors of presenting the team with their second place trophy. She expressed gratitude to the organizers for hosting a successful event.

Head coach for the team was Shem Maxwell who is attached to the Department of Youth Development and Sports.

The winning team, Jamaica, won all six of their games with 230 goals and just 82 against, a goal difference of 148. Christina Byron was the MVP of the team and the team was named “best defending team” and “best shooting team”.

Prime Minister of Saint Lucia Allen Chastanet presented Jamaica’s Sunshine girls with the championship trophy. The Jamaicans were the defending champions and have now won the tournament a record 12 times.

In third place was Barbados, who like Saint Lucia had four wins, one loss and one draw. The team however recorded 169 goals and 126 against, a goal difference of 43. They were presented with their trophy by Donavan Williams, Permanent Secretary in the Ministry of Youth Development, Sports and Culture. Barbados’ MVP was Akia Small and the team also received “the best team spirit” award.

Trinidad and Tobago won the shooting competition and was also named “the best uniformed team” and “best team on parade”.

Netball Saint Lucia’s Liota Charlemagne-Mason was recognized during the closing ceremony Wednesday evening, for taking up the mantle to stage the tournament.

Prime Minister Allen Chastanet, who was present during the games, commended the organizers as well as the Department of Youth and Sports for assisting with the staging of the tournament which he said augured well for netball in Saint Lucia. Congratulating team Jamaica for what he described as their “incredible level of competition,” the Prime Minister went on to commend all the teams. “I was impressed with the talent witnessed throughout the tournament and the passion and commitment which was on display,” he said.

The youth championship is named after international Trinidadian netballer Jean Pierre and was first held in 1998 by the Caribbean Netball Association each year except 2003, 2007 and 2013. Sixteen countries from across the Caribbean are eligible for participation.