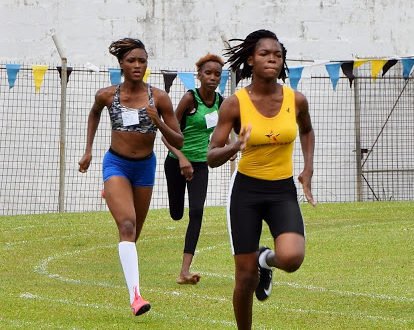 Morne Stars Athletics Club- Yet another member of Morne Stars Athletics Club is off to the United States on an athletics scholarship for the new academic year. Twenty year-old sprinter Allana Paul is now on a full athletics scholarship from Briar Cliff University in Sioux City, Iowa. The multiple national champion will be pursuing a four-year degree programme in Kinesiology at her new school.
Under BCU’s new Director of Track and Field and Cross Country, Scott Barnes, the Castries Comprehensive Secondary School (CCSS) alumna will take aim at the Chargers school records in the 100m, 200m, and 400m. She will also hope to have an impact indoors and out at the Great Plains Athletic Conference (GPAC), and the National Association of Intercollegiate Athletics (NAIA).
A triple individual gold medallist at the 2017 Windward Islands School Games, Allana was the top scorer in track and field for two years in a row at the four-nation multidisciplinary competition. She won the 400m and 200m at that meet in 2016, having also won the national title in the women’s 400m, and national junior titles in the 400m and 200m.
A member of four-time National Club Relay Champions, Morne Stars Athletics Club, where she was coached by Michael Peterkin and Dane Magloire, Allana was also a 200m silver medallist at the 2017 Meeting de la Cigogne in Martinique, adding to her national junior title in the 100m and 400m, and Independence Games gold in the 200m.
For two years in a row, Allana has been adjudged the Morne Stars Athletics Club’s Female Track Athlete of the Year, as voted by her teammates and coaches. She serves as a mentor and role model to many of the younger athletes, especially her litter sister, Aaliyah, a talented sprinter in her own right, and a student at CCSS.
Says Allana:
“I am excited and ready. I plan to aim for titles and records. I want to keep improving, and hopefully I can run fast enough to qualify to represent Saint Lucia internationally. I was determined to get that scholarship, and I got it. In the same way I’m determined to be the best in everything I do. I just want to say a heartfelt “Thank You” to my parents, family, friends, coaches, and teammates for supporting me.”
Other members of Morne Stars Athletics presently on scholarship in the United States include jumpers Daren Defreitas, Desran Desir, Kevin Norville and Udoka Constantine. Djal Augustin, Marva Herman and Nicole Montoute, all three of whom are also national footballers, earned scholarships this year through the Free Kick Foundation.