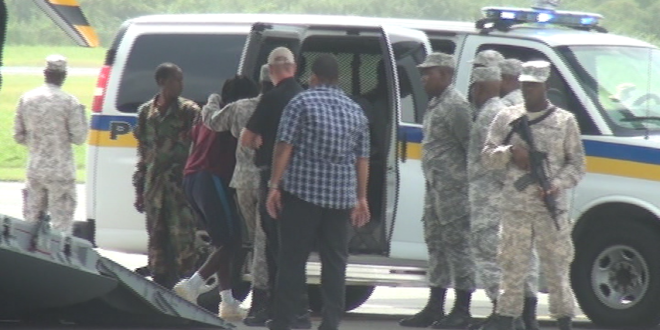 Two aircraft landed in Saint Lucia at the Hewanorra International Airport on September 26 to off-load more “high-risk” inmates from the British Virgin Islands [BVI] and the Turks and Caicos Islands [TCI].

Hurricane Irma wreaked widespread carnage on the two territories in September and caused severe structural damage to the main penal complexes on both territories.

The Saint Lucian government volunteered to hold inmates from the TCI and despite public and political scrutiny, on September 25 seven [7] BVI prisoners arrived in Saint Lucia and have been detained at the Bordelais Correctional Facility [BCF].

A September 13 statement from the Office of the Prime Minister [OPM] confirmed an initial agreement with the TCI to taken in three [3] prisoners.

BCF is Saint Lucia’s primary penal complex and was initially constructed to hold up to 450 inmates. HTS News4orce interviewed BCF Director of Corrections Mr. Verne Garde on September 26 and he disclosed that the prisoner capacity at the facility is at its lowest in recent years – 518. [BCF] Director Garde contends that the facility is ‘well within the capacity to be flexible’.

Local authorities have received 10 more foreign inmates, seven [7] from the BVI and three [3] from the TCI. To date, Saint Lucia has accepted 17 inmates from the storm ravaged territories –all of whom have been classified as ‘high-risk’.

“Let me take the opportunity to assure all St Lucians that your security is not being put at risk. But I think this is the humane thing for us to have done at a time when our brothers and sisters and our friends and family need us the most. It is the most important time for us to stand up and be counted.”–Sept 13 OPM statement from Prime Minister Allen Chastanet

On September 12, the United Kingdom based Telegraph news agency reported obtaining ‘leaked’ Cabinet notes that indicated Saint Lucia had also agreed to hold 40 ‘high-risk’ prisoners who had been recently recaptured in the BVI after a Hurricane Irma jailbreak.

Sources indicate that the foreign inmates are currently serving out sentences ranging from 10 years to life imprisonment for various [criminal] offences including murder. Authorities have not disclosed the possible duration of the temporary detention for the foreign inmates in Saint Lucia.

Director Garde told News4orce the British government has pledged resources and support to house the prisoners in a ‘special unit’ at BCF. [Watch video]