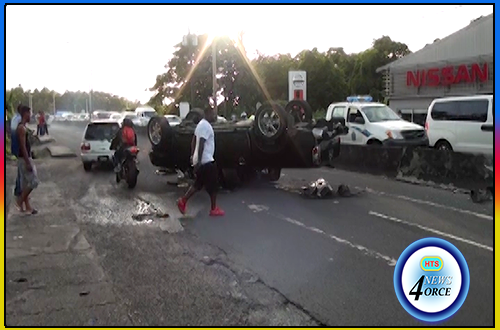 And there was more carnage on the Castries to choc dual carriage-way after a pickup truck capsized along the Vide Boutielle high road, Friday afternoon.
The crash occurred during the height of rush hour traffic.
The details surrounding the collision are still emerging, but preliminary reports indicate that the southbound Nissan Navara knocked over a jersey barrier before flipping over.
Amazingly, the driver of the badly damaged vehicle appeared to have emerged from the wreckage unscathed.
However, he was shaken by the incident and declined to speak to News4orce on the scene.
Traffic was backed up for miles, as traffic police cordoned off the crash site.