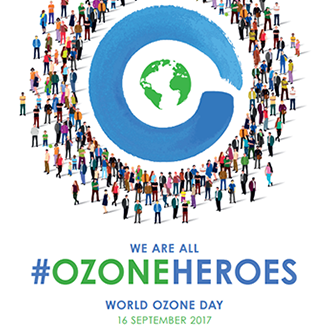 Saint Lucia will join the rest of the world in celebrating the International Day for the Preservation of the Ozone Layer, on Sep. 16.

This day was designated by the United Nations General Assembly in 1994, to commemorate the signing of the Montreal Protocol on Substances that Deplete the Ozone Layer on Sep. 16, 1987.

The ozone layer is the protective shield of ozone gas that surrounds the Earth and protects us from the sun’s harmful ultraviolet radiation. Prolonged exposure to UV radiation can cause skin cancers and eye cataracts in humans. It can also have adverse effects on the marine ecosystem by killing small animal life such as plankton, which play a vital role in the food chain.

Under this international treaty, all countries of the world agreed to implement measures to eliminate the production and use of a group of man-made chemicals called ozone depleting substances (ODS). Chlorofluorocarbons (CFCs) and hydrochlorofluorocarbons (HCFCs) are two groups of ozone depleting substances widely used in refrigerators, air conditioners, fire extinguishers and as propellants in aerosol sprays. The discovery by scientists of a “hole” in the ozone layer in 1987, sparked cause for concern and served as the driver for action aimed at “healing” this damage to the ozone layer.

This year’s International Day for the Preservation of the Ozone Layer marks the 30th Anniversary of the Montreal Protocol on Substances that Deplete the Ozone Layer and is being celebrated under the theme “Caring for All Life Under the Sun”. The theme seeks to celebrate the success of the Montreal Protocol and its critical role in caring for life on Earth over the past 30 years, by phasing out more than 99 percent of ozone-depleting chemicals and significantly contributing to climate change mitigation, as many of these ODS are also greenhouse gases.

During the month of September and in commemoration of Ozone Day 2017, the Department of Sustainable Development will be undertaking a number of activities geared towards public education, awareness and sensitization on the continuing need to protect our fragile ozone layer and the link with climate change. Activities include the broadcasting of the minister’s address on Ozone Day on NTN, publishing of articles in local newspapers, special training for technicians in good refrigeration and air conditioning practices and the launch of UN Environment’s Refrigerant Literacy Course, training for Customs Officers in the enforcement of the Montreal Protocol Regulations, and presentations to various schools.

The department takes this opportunity to remind the public that every action counts in our fight against ozone depletion and climate change. The Minister with responsibility for Sustainable Development encourages all Saint Lucians to pay close attention to purchase only ozone and climate friendly products and equipment and to carefully read labels. The public is also encouraged to purchase solar AC Units instead of a conventional one, to gain double benefits, as well as to hire a Certified Technician to perform repairs on your AC unit, refrigerator or vehicle, asking the technician to produce his or her ID.

For more information please visit the website of the National Ozone Unit at www.estis.net/sites/nou-lc/ and join the #OzoneHeroes campaign, which will be launched on Sep. 14, at www.ozoneheroes.org.