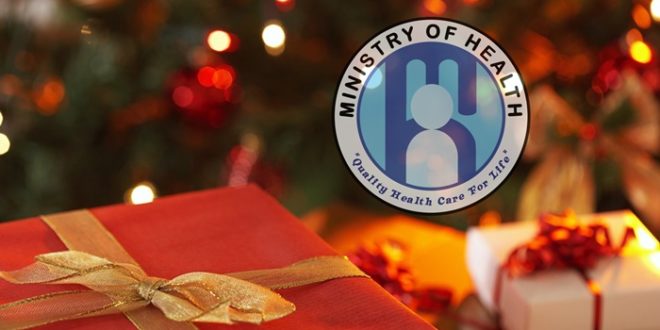 (PRESS RELEASE) – The Ministry of Health and Wellness issues a special appeal to persons during the festive season to place safety and well-being high on their agenda.

Traditionally, the festive season is a time of giving and sharing with family and friends however the Ministry of Health cautions individuals not to accede to excesses in alcohol consumption, and any form of reckless behaviour which can potentially compromise their personal safety and that of others.

Given the advent of the Festive Season the Ministry of Health and Wellness wishes everyone a Merry Christmas and the best of health in 2018. Medical Officer of Health, Dr. Sharon Belmar-George outlined some simple health tips that if adopted will significantly reduce the burden on the healthcare system and prevent personal harm during the festive season and beyond.

” We note that during the season many persons stop taking their medication because of their increase in the intake of alcohol. We would like to advise the public to stay on their medication as prescribed because it could lead to their blood pressure going higher or their blood sugar not being controlled. We are also advising the public to take basic hygiene measures in terms of food preparation and hand washing during food preparation and also during the festive season.”

“The other issues we would like to note is because of the increased alcohol intake, increased activities, increased parties we tend to note an increase in vehicular accidents at this time. We are asking persons when they are out to limit the amount of alcohol that they take in because this also affects the number of accidents that we see.”

“The other factor which increases this is sleep deprivation. Persons are out very later, they may be tired and may be travelling long distances and this can also lead to increased vehicular accidents and incidents. During this period our urgent care and emergency facilities are usually overwhelmed and also our bed capacity at the public hospitals. We are asking the public to work with us and to take the necessary measures. Because of the increased activities we are also asking persons to be careful and to be weary of their surroundings late at night in dark areas to reduce the possibility of harm and incidence at this time as well.”

Improper food preparation and handling practices are also a major concern during the festive season which usually leads to a rise in incidences of Gastroenteritis. Environmental Health Officer, Anentasha Goolaman provided some useful food safety tips. These include not storing food or grocery items requiring refrigeration, such as meats, ice cream, cheese, for longer than four hours in an enclosed vehicle. She also encourages the preparation of foods as early as possible to eating times. Refrigerate leftovers as soon as persons have eaten. Never store leftovers on the kitchen counter and use these refrigerated food items within two to three days.

” Temperature and time are the two conditions that bacteria need to grow. So if you’re serving foods that should be served hot or cold at their correct temperatures that means that you’re working against time and temperature. So that way your food will be a lot safer. When you’re using chopping boards and utensils for raw meats use separately for ready to cook foods. Ready to cook foods are sandwiches, salads, those items you’re going to eat without much preparation.”

The Environmental Health Department recently published in the local newspapers a list of food establishments which conform to public health regulations and thus advises the public to acquaint themselves with this list before dinning out.

“So if you are going to be eating out this holiday season, we’re asking the public to take a look at the establishments ensure that they have a public health license from our department.”

Family and friends are also asked to look out for their loved ones this festive season, don’t drink and drive, get adequate rest and sleep, remain hydrated with lots of water, wash hands regularly and to engage in responsible health promoting behaviour.