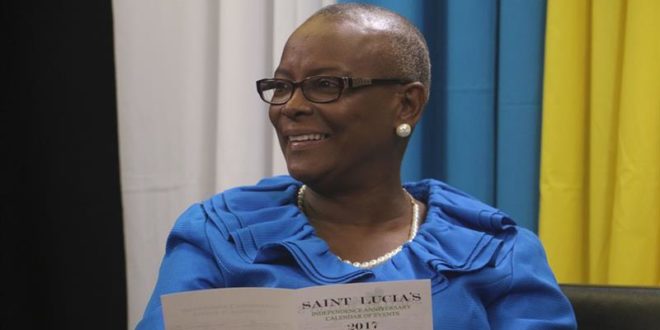 Press Release (GIS) – A sitting of the upper house took place on the morning of Feb. 15.

Following the morning’s prayers, Sen. Hon. Fortuna Belrose, Minister for Culture, took some time to reference Saint Lucia’s 39th Independence Anniversary. In doing so, the minister paid tribute to Saint Lucians who are no longer with us but whose spirit and resolve helped them to make their mark amongst their Saint Lucian counterparts.

“Today, on the eve of our 39th Independence anniversary celebrations, our nation continues to say goodbye to passionate, vibrant leaders from culture, arts and sport. Some of the personalities that graced our landscape have now gone and these include people like Miss Theresa Hall who was a mother to all of us, guitarist Humphrey Inglis who along with former director of audit Bernadette George were two of the kindest public servants I have ever encountered.

“We have Gandolph St. Claire who passed away just recently. He was a playwright extraordinaire and a passionate and astute lover of the arts. We also lost George Mellow Alfred, Philippa Charles—sports people, and then of course we lost Merichia McNicholas a counsellor who served on one of our constituency councils in Soufriere. So we have lost many young lives including Brandon St. Omer who was the grandnephew of our very own Dunston St. Omer. We lost two of the most gifted sports people of this generation in Bradley Cyril and Nick Elibox.”

The minister expressed her condolences to the families, friends all those whose lives they impacted while on earth.