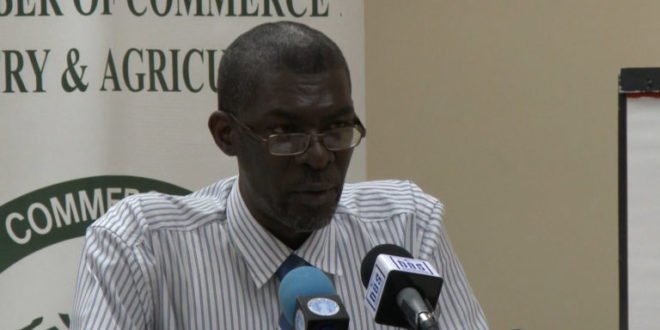 [Press Release] Officials from The Ministry of Health, Saint Lucia Chamber of Commerce and business agencies, met to discuss ways in which Healthcare coverage can be boosted for citizens of Saint Lucia. The Quarterly General Meeting was convened on Thursday May 24th, at Bay Gardens Hotel.

According to a 2005/2006 poverty assessment, approximately three-quarters of Saint Lucia’s population does not have health insurance coverage, and the quarter of the population with health insurance is largely concentrated in the richest income brackets. It is against this background, the Government of Saint Lucia is committed to providing national health coverage to its population, as those most in need are being denied access to healthcare due to financial constraints. Permanent Secretary in the Ministry of Health – Felix St. Hill said, no one will be left out of the National Healthcare program.

“I think the important thing about us implementing National Health Insurance is the fact that quite a number of persons are uninsured and we have a large number of persons who also cannot afford to pay for services with regard to their own health. The health insurance concept is that no person in Saint Lucia will be left unattended by virtue of the fact that they are out of pocket. So National Health Insurance will certainly mean that every Saint Lucian citizen will be afforded an opportunity to get access to healthcare, whether it is secondary or tertiary or at the primary healthcare level. ”

Meanwhile President of the Saint Lucia Chamber of Commerce, Martin Dorville said, several factors must be considered before this project can be implemented.

“It appears that there is still a lot to be finalized, there is nothing at a final stage as yet but it is not too early for a lot of the issues, a lot of the concerns, for a lot of the questions to be posed so that, that can be factored into the way forward and that’s what we did today. I think there were many profound questions by members of the business sector. We are concerned about what it is going to look like, how is it going to be implement, what kind of regulatory authority will be there what governance issues will be put in place, what process of engagement is going to be put in place toget the views of other stakeholders which will be valuable to inform what that final product is going to look like.”

The Government of Saint Lucia is currently seeking support from The World Bank and other agencies such as the European Union to complement the efforts of this intended project, which is aimed to provide health coverage across the population and ensure that a quality package of health services is made available.