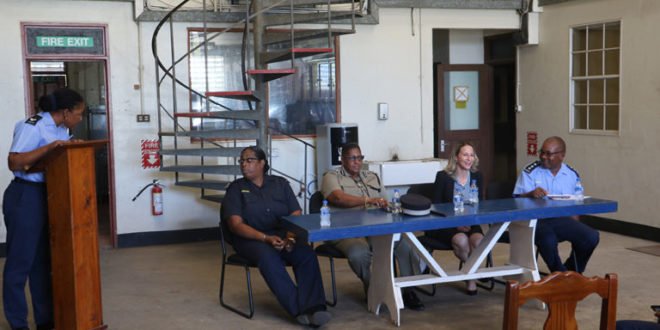 At a handing over ceremony on Thursday April 12, 2018 held at the Marine Police base at Vigie Cove Mrs. Chastanet praised the marine unit personnel for their dedicated service under dangerous conditions and reiterated her foundation’s continued appreciation and support for their unselfish service to Saint Lucia.

She also applauded SAFE Boats International, the manufacturer and supplier of the seats for their offering of four seats at no cost to the Foundation. The total value of the eight seats are just over EC$30,000.

Attending the brief ceremony were ACP Frances Henry, Officer in charge of the Marine Unit ASP Finlay Leonce, Second in Command Insp. Nadine George, and Mistress of Ceremony Ag. Sgt. Annemarie Bailey. Other ranks of the Marine Unit were also in attendance.