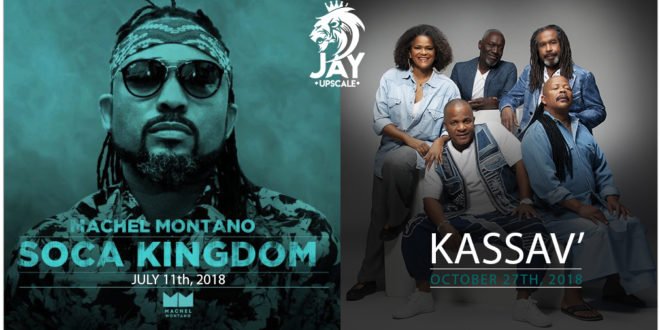 CASTRIES, SAINT LUCIA, May 18, 2018: Two of the biggest names in the Caribbean entertainment world will touchdown on the sun-drenched Caribbean island of Saint Lucia in what is being lauded as the most anticipated and exciting event this year.

Scheduled to take place in the north of the island, the soca concert will bring even more diversity to an already exhilarating carnival calendar this year. Drawing increasingly huge audiences wherever he performs globally, Monk Monte (Machel’s latest stage moniker) will bring his exhilarating, energetic, fast-pace and welcomed unpredictability to the stage. The Grammy nominated, multi International Power Soca winner and reigning 2018 Road March title holder will headline a cast of some of the biggest and most popular soca artistes in Saint Lucia.

The two large productions with full live-bands performances featuring music heavyweights Machel Montano and Kassav, are spearheaded by U.S. entity J.U.M.P. (Jay Upscale Marketing and Promotions) of which Saint Lucian ‘son of the soil’ Jermaine Magras serves as founder and at the helm. According to Magras, who oversees over fifty (50) events in the Western Hemisphere annually, “We have assembled an amazing team of both local and international industry experts to coordinate these concerts and I am confident that Saint Lucians will be thrilled with not only the performances but also with the execution of these spectacular events.”

Rated as the most decorated and leading soca artiste in the world, and having last performed mainstream on Saint Lucia in 2014, anticipation is at an all time high for Machel’s return to the island. “Bringing the concert series to Saint Lucia is anchored not just in providing the highest quality entertainment with the biggest names, but more so in the need to give back and contribute to the development of a bourgeoning entertainment industry on the island, while in the process helping to establish new industry benchmark standards,” noted Magras.