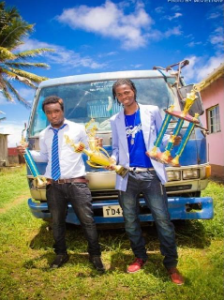 They are musical brothers who can dance, act and sing. When their energies combine, creativity abounds. Subance and Mighty! The two have taken St. Lucia by storm with their head spinning and eye-popping contributions to the controversial new genre of music called the Dennery segment or Lucian kuduro. A blend of dancehall, soca and zouk with local solo and sewenal at its core, Dennery segment reportedly began in the 1990s with artistes like Yardie, Alley Kat, Shepp Dawg and Crocodile.

Subance, whose real name is Gervan Janvier and Mighty, Nevin Alexander, are both keen entertainers. Subance, the elder of the duo started performing at the age of 7 while Mighty started when he was 10. Dennery-born and bred, the two were always deeply embedded in the village culture of solo, the La Rose and La Maguerite festivals, and of course jounen kwéyòl – all of which have at their core a culture which revels dance, theatre and pure, unadulterated creole.

The genre is however receiving serious flak because of its crudeness, focus on the sensual and the lewd gyrations it provokes. Interestingly, a more honest depiction of the issue at hand can be reached through a focus on the effect of word choices available on our communication spectrum in St Lucia which is multilingual. Buttocks (standard English), bum bum (St. Lucian English dialect), bonda/fès (St. Lucian creole) and tjou (St. Lucian creole expletive) all refer to the same thing, but each evokes a picture and reaction that are vastly different to the Saint Lucian mind. And so it is that Dennery Segment stars are often scolded and shamed for the vulgarity and raw descriptions in their lyrics by those of us with more sensitive minds and ears. The result, willingly or grudgingly has been a noticeable toning down of songs penned by the creative, innovative writers over the years, in turn producing calmer but fortunately no less popular songs, which drive young and ‘shameless’ older folks wild!

Asked if they are conscious of the reach of their music, particularly with the youth, and their status as role models, the two young men disclose that they are aware but are also humbled by this fact. When asked to comment on the focus and portrayal of women in Dennery segment songs, the two exchange knowing looks and explain that they only rap about what they see out there. Subance expounds that there is a time for everything and that their music specifically aims to liven up party atmospheres, and since the only way a party is livened up is with lots of girls, one can understand why girls (what they do, who they are) is the central focus of their songs. Subance, whose father lives overseas, was raised by his mother and has two sisters. In his own words, his mother is his Queen. He states categorically that he has a great amount of respect for women. Mighty too, expresses similar sentiments. In his case, he was raised by his father since his mother passed away when he was 12. His father has had to play both roles and this has made Mighty appreciate exactly how much mothers or women mean in society.

Subance, avidly pursued acting, football and cricket growing up and exuded great skill in each area. Mighty loves books and developed a passion for Architecture and Building Engineering in which he got an Associate’s Degree. What does the future hold for the two young artists, evidently significantly endowed with musical intelligence and budding embodiments of Saint Lucian culture?

One thing is for certain: gyrate to their music or turn red at their lyrics, these young men are talented and indisputable front runners in the growing circle of artistes who are carving a niche on our musical scene, producing work indigenous to our culture which unites St. Lucians at home and abroad in moments of cultural appreciation, nostalgia and celebration. Hopefully, in the years to come these rough diamonds will be led to shine and increase in value through constructive criticism, expert guidance and increasing financial support.