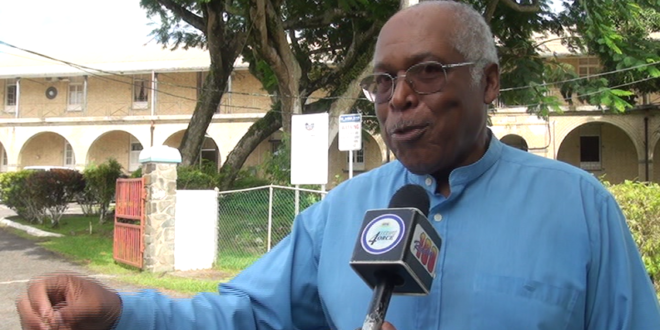 The Head of the Department of Government, Sociology, and Social Work at the University of the West Indies [Cave Hill Campus] Dr. Tennyson Joseph, has come under fire from Saint Lucian political pundit Mr. Denys Springer over recent comments on the perceived threat of ‘businessman politicians’.

Dr. Joseph delivered the second in a series of lectures organized by UWI Open Campus, and Legalese SVG Incorporate last week in St. Vincent.  The lecture entitled, “Any cook can govern?: Plato, Donald Trump, and the Rise of Businessmen Politicians” warned against the rise of the businessman-politician in the Caribbean, singling out Saint Lucia’s Prime Minister Allen Chastanet and United States President Donald Trump as two examples.

Dr. Joseph claims the UWP’s 2011 loss at the polls, and neo-liberalism, created a platform for Allen Chastanet’s rise to the leadership of the party – a situation, which he argues is similar to that of Donald Trump’s path.

Prime Minister Chastanet defended his ability and tenure in government while hitting back at Dr. Joseph during a weekly pre-Cabinet press conference on August 14 – suggesting the UWI lecture’s recent papers were racially charged. The Saint Lucia Prime Minister went further questioning whether Dr. Joseph should remain at UWI.

The General Secretary of the ruling United Workers Party [UWP] Oswald Augustin has also come to the defense of the Prime Minister and has called for UWI to ‘discipline’ Dr. Tennyson Joseph.

On August 15, the Opposition Saint Lucia Labour Party [SLP] led by Philip J Pierre accused Prime Minister Allen Chastanet of using his office as a “bullying pulpit”. According to Pierre, the Prime Minister should be more diplomatic as his words can sometimes create hardship for people.

Meanwhile the Head of the UWI Open Campus in Saint Lucia Dr. Veronica Simon believes that a University Lecturer is entitled to offer opinions on relevant subject matter.