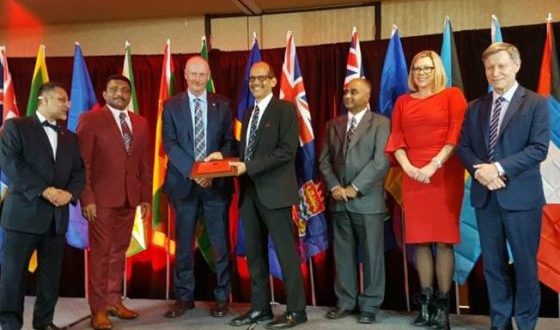 About 300 community members were in attendance as the local Caribbean community reached out to assist the Caribbean countries in heart health education and practice. In his key note address,

Dr. Greenidge spoke about the gap in health care standards between the first and the developing world. He mentioned that there are three main supports of the bridge across this gap which is education, collaboration and innovation. Education involves activities such as continuing education conferences, lectures and workshops that transfer hands on skills.

Caribbean people are really friendly and this allows them to form very meaningful bonds with persons from the first world who over the years have been tremendously supportive in providing both training and equipment allowing us to provide a high-level of medical care despite our lack of financial resources.

He concluded that necessity is the mother of invention and Caribbean people have found innovative ways to achieve good results at a lower cost. Surgery continues to be a challenge in the Caribbean but as a resourceful people they continue to look for ways to improve the level of care offered to patients.

Dr. Greenidge is a General Surgeon. He completed his MD degree at the University of the West Indies and his surgical training initially at the Queen Elizabeth Hospital, Barbados and later in Glasgow, Scotland.

He trained in General Surgery with specialization in arterial and venous disease, endoscopic and laparoscopic surgery. He recently (2012-2013) returned to Scotland to do a fellowship in gastro-intestinal surgery which included laparoscopic surgery and gastrointestinal cancer surgery in addition to surgery for gall stones, oesophageal reflux and obesity.

He was a travelling fellow of Royal College of Physicians and Surgeons of Glasgow and visited Mercy Medical Centre, Iowa, USA in May 2000.

He is the current secretary of the Caribbean College of Surgeons. For many years he was a reserve officer in the Barbados Regiment and spent time both in the field and the Medical Unit. He has worked as a consultant surgeon at Victoria Hospital in St. Lucia 1996-2002, Queen Elizabeth Hospital 2002-2004 returning to Victoria Hospital 2004-2012.

From 2013 he has been practicing at Tapion Hospital, St Lucia. He was an associate lecturer at the University of the West Indies from 2002-2004. He has been a volunteer at St. Jude Hospital, St Lucia since 2015. His current practice includes a wide range of areas including abdominal surgery, peripheral vascular disease, breast, endoscopy and laparoscopic surgery.