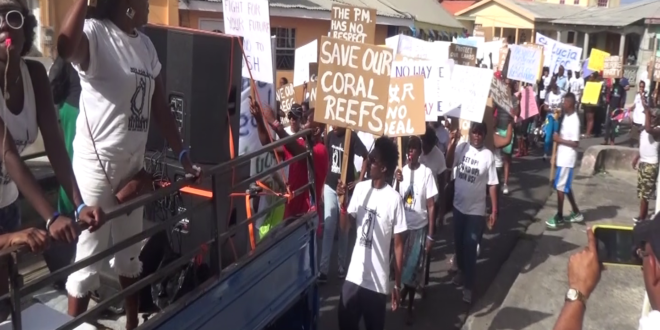 Scores of placard bearing protesters, some adorned in anti-DSH apparel converged on Independence Square in Vieux-Fort town, before leading a 1.7 km procession to Sandy Beach and back.

Residents from Vieux-Fort and other southern communities participated in the ‘national protest march’. The demonstration also registered participants from northern districts including Castries and Gros – Islet. The underlying theme of the protest march was ‘We want a better deal’ – a message directed at Saint Lucia Prime Minister the Hon. Allen Chastanet. HTS News4orce got comment from Julius James, coordinator of the march. Listen below.

In 2016, Prime Minister Chastanet officially signed a Framework Agreement with DSH. A Supplemental Agreement was later signed that year however, despite a confidentiality clause in both Agreements – the documents leaked to the public.

Lucia’s main political Opposition, the Saint Lucia Labor Party [SLP]. The three [3] civil society groups and the SLP opposition are demanding the government renegotiate the DSH deal. They oppose the proposed construction of a man-made causeway to the protected Maria Islands and,

allowing exclusive authority for large scale commercial development expected to consume more than 800 acres across Vieux-Fort north and south and, control over financial accounts linked to the project.

The VF4Cs, I WILL STAND and the Concerned Citizens of St. Lucia claim they are not against economic development.