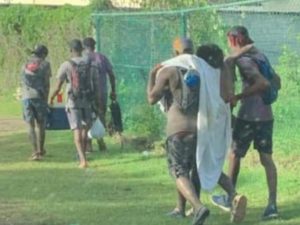 The Saint Lucia National Youth Council (SLNYC) sees a link between photos of intoxicated youths that have been posted on social media and a major social crisis in this country.

The council issued a hard hitting statement Monday in the wake of a weekend event in the North of Saint Lucia at which it said young people who were in attendance were heavily intoxicated and unable to function properly.

“They were seen lying down on the ground and this is in fact a sign of social crisis,” SLNYC Public Relations Officer, Eddison Layne told reporters at a news conference.

“It is getting to the worst of the worst and we are seeing that more and more young people are being seen as a market for the sale of alcohol, rather than the creative and inspirational individuals that they are,” Layne lamented.

He called on organisers of the event to fully understand the severity of the situation.

The SLNYC official questioned whether checks and balances were in place at the activity. It was held at Pigeon Island.

According to Layne, the event occurred on the heels of carnival where there are events in so many communities involving the same concept of consumption of an ‘absurd amount’ of alcohol directed towards young people.

He asserted that the authorities ought to investigate and take action in cases where youths are under the age of 18.

The SLNYC official declared that people must be held accountable.

He expressed the view that it is not enough to put ‘Drink Responsibly’ on a bottle of alcohol or simply air an advertisement echoing the same sentiment.

He stated that companies that produce alcohol should be mandated to contribute to social and youth development, in addition to social programmes and rehabilitation for those adversely affected by their product.

“We cannot allow our youths to go through the cracks,” Layne asserted.

He noted that many lives over the years have been ravaged and affected by alcohol consumption here in Saint Lucia.

“For events where young people are going to attend, there should be no alcohol,” the NYC Public Relations Officer declared.

He observed that youths are seen as a large market for alcohol at a time when the health care system is under tremendous pressure.

The NYC spokesman made it clear that he was not implying that young people who attended the event  cannot be held accountable.

But he explained that it is still within the purview of the authorities, including parents, to look after young people.