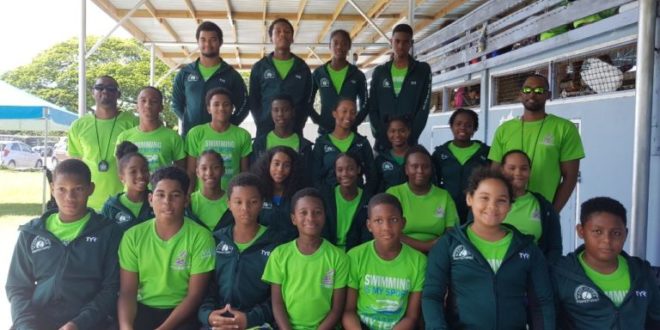 [Press Release] There is much to celebrate as Lightning Aquatics (LA) Swim Club welcomed home two of its swimmers who performed remarkably well at the recently concluded XXXIII CARIFTA 2018 Aquatics Championship held in Jamaica.

Naima Hazell and Naekeisha Louis who swam in the 11-12 girls age group formed part of the 10 member Saint Lucian team that participated in the CARIFTA Championship from March 31- April 4, 2018.

Naima competed in 7 events and made finals for 6. She was the first to capture a medal for the Saint Lucia team when she copped bronze in the 50m Backstroke. This bullet in the water then went on to capture two silver medals in the 50m Breaststroke and 50m Freestyle where she set two new age group records. She also achieved Personal Best Times (that is, she improved or reduced her time) in 6 of her 7 events.

Meanwhile, Naekeisha swam 5 events in which she achieved Personal Best Times in all. This determined swimmer placed 5th in the 50m Fly and 6th in the 50m Freestyle. What is noteworthy about Naekeisha’s performance is that she was seeded at 16 for the 50m freestyle race and was able to muster the mental and physical strength going into the finals and placed 6th. Both swimmers qualified for the C.C.C.A.N. (Central American and Caribbean Championship) scheduled for June 28th to July 3rd.

LA’s Head Coach, Stefania Felix said, “These two swimmers performed extremely well considering that the pool was out of commission for weeks and the Club was unable to deliver its usual training. Additionally, because they are very young, I think CARIFTA is a great starting point as they follow the same path of Danielle Beaubrun and make their way to the Olympics in a few years”.

Naekeisha and Naima went on to show true sportsmanship and character as they arrived in Saint Lucia just in time to swim with their teammates in the Rodney Heights Aquatics Center (RHAC) 19th Inter-Club Invitational Swim Meet held from April 5th – 9th. Although, LA didn’t have its full complement of swimmers, majority of those who participated achieved Personal Best Times and copped several medals which gave the club the 3rd place Saint Lucian team and 8th place overall out of 23 teams from the Caribbean.

Some of the highlights for LA during RHAC include the exciting relays where a team consisting of Naima, Naekeisha, Courtney Paul and Angelique Gaillard copped two gold medals in the 200m Freestyle relay and the 200m Medley relay. The 13 and over girls had 2 teams comprising of Aliyah Henry, Britney Edwin, Gabrielle Charles-Soomer, Chloe Thomas and Steffy Clery who gave a good account of themselves by snatching two bronze medals.

Meanwhile, the boys 13 and over relay team of Andre Samuel, Yannick Layne, Diandre Edwin and Jeannot Walters captured a bronze in the 200m Freestyle relay. Karic Charles amassed 2 gold medals in the 50m and 200m Breaststroke and silver in the 100m Breaststroke – breaking 3 meet records. He also snatched 2 bronze medals in the 50m and 100m Butterfly. Naekeisha Louis copped 3 silver medals in 50m fly, back and breast and battled hard to break the meet record for the 25m Sprint Challenge that was set by her teammate Naima Hazell in 2017. Naima obtained 4 gold medals in 50m breast, fly and back and 100m breast and silver in 200IM, breaking meet records in the 50m and 100m breast.

According to LA’s President, Mrs. Tessa Charles-Louis, “We are proud of our swimmers and we’ll continue to challenge them to be the best version of themselves in and outside of the pool. We are extremely thankful to The Oliver Gobat Sports Fund (TOGS), and Courts St. Lucia Limited for providing financial support to our CARIFTA swimmers, who made not only LA proud but Saint Lucia. Congratulations to the other CARIFTA swimmers who gave their best in the face of stiff competition – Mikaili Charlemagne and Allandre Cross from Sharks Swim Club and D’Andre Blanchard, Terrel Monplaisir, Jayhan Odlum Simth, Devin Boodha, Jamarr Archibald and Veronica Brown from Seajays Swim Club”.

Meanwhile, in an effort to continue to mold well-rounded swimmers, LA staged ‘Boys Talk’ on March 24th. Dr. Wayne Felicien a graduate from Carlos J. Finlay University with a Bachelor in Medicine and Surgery was the presenter. Dr. Felicien delivered an interactive, educational and fun-filled session on hygiene, discipline, patience, healthy eating habits and healthy lifestyles. Thanks also to Renwick and Company Limited for donating useful masculine products to our swimmers. Earlier in the year a session dubbed ‘Girls Talk’ was held for the female swimmers.

Next on the agenda, is LA’s 2017 Awards which will be held under the theme Lightning Aquatics: Leading the way to Greatness. The club is also getting ready to stage its 2nd annual Relay Carnival at RHAC. For more information about joining or supporting LA please visit us on Facebook: ‘Lightning Aquatics Swim Club’.