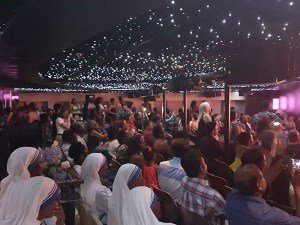 PRESS RELEASE:-It was an evening of fine entertainment and fine company in a fine setting. The Cabaret room onboard the Freewinds Cruise Ship which was berthed at Pointe Seraphine was packed to capacity as the Lightning Aquatics (LA) Swim Club and the St. Lucia Sickle Cell Association teamed up to host a fundraiser dubbed “An Evening of Relaxation with Friends”.

According to LA’s Club President, Mrs. Tessa Charles-Louis, “LA Swim Club is thankful to Mrs. Paula James, the recently elected Vice President of the Saint Lucia Amateur Swimming Association for making this possible. The proceeds from the show which was our last fundraiser in May provided much needed support to 18 of our swimmers who participated in the recently held 26th Annual Aquatic Centre International swim meet in Barbados. Special thanks to the Captain and staff of Freewinds for being so benevolent and we hope that others may follow their example in providing support to various groups on island in need of assistance”.

The lineup included Deland “Deesax Natural” St. Jules, Frankie Du Boulay, Claudia Jn. Baptiste, Cleopatra Hall, Jean Mederick, Paula Calderon, and surprise guest International singer from Puerto Rico, Brenda Cifuentes. Dr. Stephen King also took to the stage to perform a thought-provoking poem. Each act had the audience swaying and singing along to the melodic songs that were being performed. The talented Freewinds Band must be commended for not missing a single beat as they accompanied the artistes. The Master of Ceremony for the evening was none other than Radio Personality, Russel Lake.

The LA Swim club takes this opportunity to thank all patrons for attending, the performers who freely gave of their time and talent and the Freewinds Cruise Ship which has been supporting charitable causes in Saint Lucia for over 25 years.

Shot of the audience