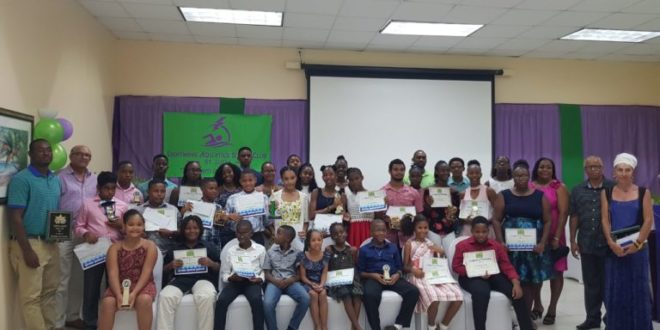 The action will kick off at 1 p.m. as swimmers from various clubs on the island strategize and bond with their teammates to undertake the various relay events. Whilst there will be a few individual events the focus as the meet’s name suggests is on relays.

Additionally, LA is issuing a call to non-swimming associations/groups and organizations to rally their members and staff to participate in a fun-relay event, whereby swim aids such as noodles and kickboards may be used. The proceeds from this particular fun-relay will be donated to a charitable cause keeping with the club’s Mission Possible initiatives geared at helping people in need in Saint Lucia. Interested persons are asked to register on our Facebook Page ‘Lightning Aquatics Swim Club’ or email karetta.charles@gmail.com by 6 p.m. on Friday, April 27th.

The Club’s President, Mrs. Tessa Charles-Louis said, “LA’s Relay Carnival will provide a good mix of serious swimming and fun. There will be fun events like the t-shirt relay and parents/coaches relays. We will also have door prizes and music will be provided by DJ Eddie. In an effort to ensure that a large number of LA swimmers attend the BASA invitational swim meet in Barbados in May 2018, we will also be having a fundraising Barbeque at RHAC on the same day of the Relay Carnival.”

LA’s Relay Carnival comes on the heels of the club’s 2017 Awards which was successfully staged on at the Bay Gardens Hotel on April 14th under the theme “LA: Leading the way to greatness”. The audience was aptly entertained by the multi-talented swimmers who danced to mix of ‘Reach Higher and Cloud 9’, as well as young Ethan Hazell’s rendition of ‘Year of Love’.

The guest speaker Mr. Richard Peterkin, International Olympic Committee Member Resident in Saint Lucia and Past President of the St. Lucia Olympic Committee encouraged the swimmers to remain steadfast in their pursuits and while some may not receive special awards, being involved in swimming is an advantage due to the important life skills it imparts.

The swimmers were also addressed by Mrs. Liota Mason, Deputy Permanent Secretary in the Ministry of Youth Development and Sports and Mr. Eddie Hazel, President of the Saint Lucia Amateur Swimming Association. Meanwhile, Coach Marlon James delivered a passionate speech which chronicled the Club’s successes in 2017 and the coaching team’s hopes for 2018.

Other highlights from the Awards are as follows:

Swimmers of the Year:

A special award was given to former Trainee Coach – Shernice Popo, who despite many obstacles has persevered and is now pursuing her dreams to become a certified diver. Another element of the LA 2017 Awards was the poetry contest which challenged the swimmers to submit a poem that encourages their classmates to learn to swim.

The winners of the poetry contest were Annaliese Gaillard and Angelique Gaillard. Furthermore, the Principal of the Des Barras Combined School, Mr. Ezra Joseph delivered a heartfelt thanks to the Club for its support of the school’s breakfast programme since the beginning of 2018. Mr. Joseph was also presented with another donation of books and food items at the awards which he stated would go a long way to ensure that the students are focused on their school work.