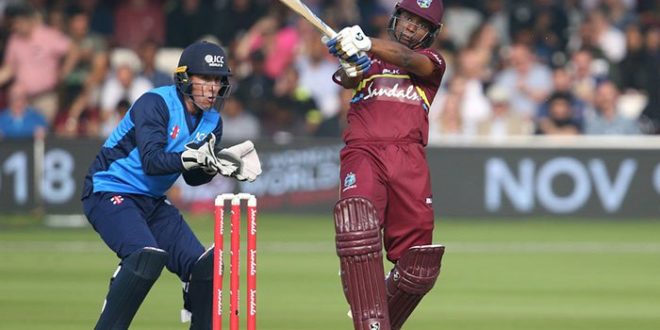 Sent in at historic Lord’s, the Caribbean side piled up 199 for four from their 20 overs, with the left-handed Lewis top-scoring with 58 from 26 deliveries.

Afghanistan leg-spinner Rashid Khan proved expensive, but was the leading wicket-taker with two for 48.

In reply, leg-spinner Samuel Badree (2-24) and seamer Russell (2-25) wrecked the top order as the World XI slumped to eight runs for four wickets in the fourth over.

And even though Sri Lankan Thisara Perera belted 61 from 37 balls, the damage had already been done and the World XI ended on 127, with 20 balls remaining in the innings.

Fast-medium Kesrick Williams provided the firepower late on to dent any attempted revival, taking three for 41 from 3.4 overs.

The contest, watched by a number of legendary former West Indies players including Sir Vivian Richards, featured an array of world stars but was played in a spirit of goodwill.

Lewis gave West Indies a rapid start, lashing five fours and sixes as he put on 75 off 47 balls for the first wicket with Chris Gayle (18).

He raced to his half-century off 23 balls, reaching the landmark by depositing a full toss from pacer Perera over the ropes at long on.

But he departed in the eighth over, pinned back on his stumps by Rashid Khan and falling lbw.

The left-handed Gayle, subdued for the most part, perished 14 balls later after facing 28 balls and striking a single four, playing back to one from part-time off-spinner Shoaib Malik and losing his off-stump.

Andre Fletcher fell cheaply for nine in the 12th over with the Windies on 100 for three, but Samuels and Ramdin then added fuel to the innings with two exciting stands.

First, Samuels stroked a pair of fours and four sixes in a 23-ball knock as he put on 52 for the fourth wicket with Ramdin, who counted three fours and sixes in a 25-ball stay.

When Samuels holed out to long-on in the 17th over off Rashid Khan, Ramdin and Russell thrilled in a 47-run, unbroken, fifth-wicket stand off a mere 19 deliveries.

Requiring 10 runs per over for victory, the World XI suffered early setbacks to lose their way.

Lewis hauled in a brilliant leaping catch at cover point to send Tamim Iqbal on his way for two as he slashed Russell square, and Luke Ronchi missed a pull at Badree in the next over and was lbw without scoring.

In the same over, Dinesh Karthik (0) made a hash of a pull and was caught by Lewis on the off side, and the slide continued when Sam Billings miscued one from Russell and was caught at mid-on by captain Carlos Brathwaite for four in the fourth over.

Amidst the carnage, Perera played with gay abandon, striking seven fours and three sixes, putting on 37 for the fifth wicket with Shoaib (12), and a further 48 for the sixth wicket with captain Shahid Afridi (11).

Afridi’s demise in the 13th over, caught at deep midwicket off speedster Keemo Paul, signaled the end of the resistance as the last five wickets tumbled for 44 runs, with the injured Tymal Mills unable to bat.

A Russell not out 21

S Lamichhane not out 4

Man of the Match: Evin Lewis.