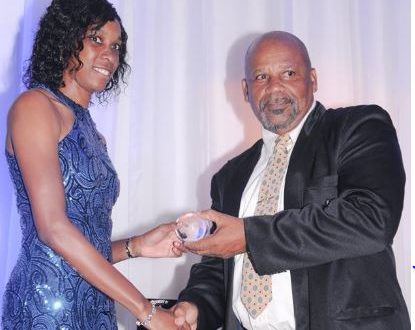 LEVERN SPENCER TO BE DESIGNATED OFFICIAL SPORTS AND YOUTH AMBASSADOR FOR ST. LUCIA

Office of the Prime Minister-

The Government of Saint Lucia will bestow on Levern Donaline Spencer the title of Official Sports and Youth Ambassador for Saint Lucia. Acting Prime Minister Honourable Ezechiel Joseph made the announcement at a special dinner held in Spencer’s honour on Friday March 29th 2019 at Sandals Grande.

The Acting Prime Minister, who also happens to be the Parliamentary Representative for the community of Babonneau, where Spencer hails from, further announced the decision by the Government of Saint Lucia to issue a Commemorative Stamp to recognize Spencer’s achievements. The Government would further honour Spencer with the donation of a motor vehicle and the naming of a Sports Facility in her honour.

Levern Spencer is marking twenty years of representing Saint Lucia in High Jump and has on fifteen occasions been named “Sports Woman of the Year”. She has also won several international medals in her field of High Jump.

The event, “A Celebratory Dinner in Honour of Levern Spencer on the Occasion of her 20th year of Representation to Saint Lucia” was also a continuation of the observance of the island’s milestone 40th Independence Anniversary.

Levern was joined by her family and friends and several sports personalities from Saint Lucia, the region and internationally. Among them Senior VP of Sportsmax Caribbean Lance Whittaker, who spoke about the magnitude of Levern’s achievement at the Commonwealth Games. Victor Lopez, president of the North and Central American and Caribbean Athletics Confederation
(NACAC) presented Levern with the NACAC Award for 20 years of excellence in representing not just Saint Lucia but the region as a whole.

It was also a night of surprises for Spencer as her coach at University of Georgia, Wayne Norton, visiting Saint Lucia for the first time, was a surprise speaker.

Also paying tribute to Spencer was Minister for Youth Development and Sports Honourable Edmund Estephane who said, “You are a great example of the role model for all young people and even the not too young. We say a very special thank you for 20 years of hard work, 20 years of zeal, sacrifice, perseverance, pride, courage, focus, lots of effort and self-discipline. We thank you for the exposure that you have given to Saint Lucia.” Gregory Lubin, Spencer’s first-ever athletics coach, was given a commemorative plaque by the Minister of Youth and Sports, in recognition of his early work with the then teenager.

Levern Donaline Spencer was born on June 23, 1984 and grew up in Cacoa, Babonneau. A past student of the Entrepot Secondary School where her athleticism was recognized, she went on to participate in several national
sports meets, before being selected for regional and international games.

Levern Spencer is a graduate of the Entrepot Secondary School and the University of Georgia.