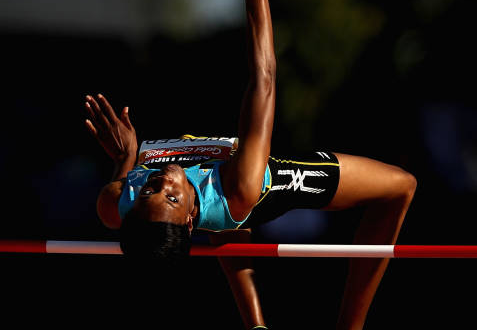 LEVERN SPENCER DOES IT AGAIN

St. Lucia had to wait until the final day of competition to secure its first and only medal at the 2018 CAC GAMES in Columbia, and it came in the form of a gold from the ever reliable  and most accomplished  St. Lucian athlete, Levern Spencer.

Competing last night in the women’s highjump, Spencer who has been having one of her best season’s ever, cleared a mark of 1.90m to win her third consecutive gold medal at this regional competition which is held every four years. After raising the bar to 1.95m, she took just one decent attempt before deciding to call it a night, as she tries to maintain her form for her remaining three major competitions in  2018.

Prior to this year, the region’s highjump star had won gold at this same event in Mayaguez , Puerto, in 2010, then followed that up with another gold in  Vera Cruz, Mexico, in 2014.

This performance by Levern Spencer, marks the second time within the space of three
months, that she has caused our flag and national anthem to be advertised to the wider world. The previous occasion being last April’s CommonWealth Games history making gold medal performance in Gold Coast, Australia.