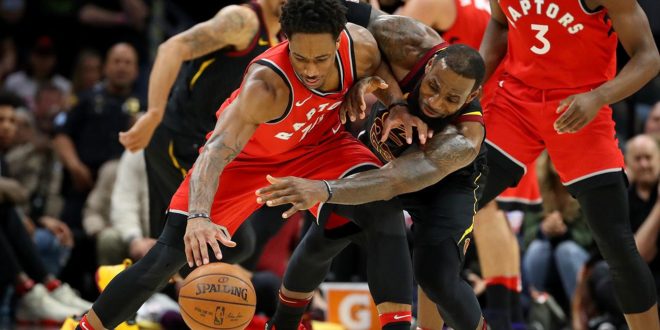 Joe Vardon, Cleveland.com- LeBron James didn’t want the Cavaliers to take a bow for DeMar DeRozan’s struggles in this series.

“DeMar DeRozan has missed a lot of easy opportunities against us,” James said.

The Cavs lead the Raptors 3-0 in this Eastern Conference semifinal and can complete their second sweep in as many conference semis of Toronto tonight.

DeRozan had one of the worst playoff games of his career in Game 3, shooting 3-of-12 for eight points. He’s averaging 18 points through three games and shooting .436. He averaged 23 points during the regular season and 26.7 ppg against the Wizards in the first round.

The Cavs assigned JR Smith to guard DeRozan and have designed their schemes to life more difficult for him.

“We just try to make it a little bit more challenging, that’s all,” James said. “He got into the lane four or five times and missed some floaters, missed some layups, missed a couple wide-open 3s that he’s been making. So it’s easy to say the job we’ve done, but when you’re playing against an All-Star starter and the caliber of player of DeMar, you just try to make it challenging on him and then hope that he misses shots.”