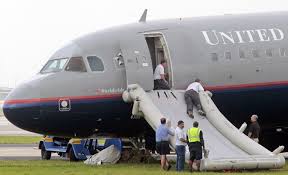 About 150 passengers and crew aboard a United Airlines flight from the Hewanorra International Airport in Vieux-Fort safely disembarked after a nearly two hour mid-air fright.

Airport sources have disclosed the pilots encountered difficulty with the landing gear shortly after a December 30 evening take off.

Emergency protocols at UVF were immediately initiated as the United Airlines flight prepared for a crash landing. The airline pilots kept the plane in the air for just under two hours as UVF first response crews readied for the invasive landing.

The troubled flight eventually landed without incident  shortly before 8 pm and no injuries were reported.

Investigators are working to determine what obstructed the plane’s landing gear from retracting.

2017-12-31
Previous Bruceville Shooting Victim Succumbs, Homicide 58
Next Gayle and WI need to break out of the funk