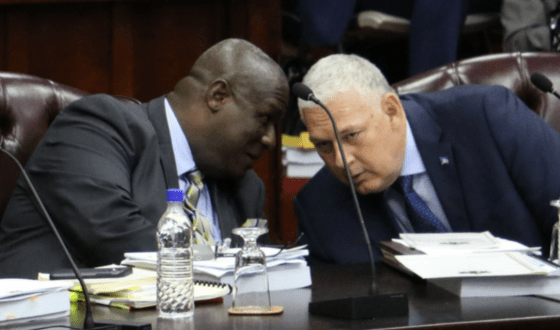 Press Release:–  The Minister for Infrastructure, Ports, Energy and Labour, Hon. Stephenson King, has commended Prime Minister Hon. Allen M. Chastanet for his stewardship as head of the Government of Saint Lucia.

Minister King made his comments in response to the prime minister’s review of the performance of the government over the last fiscal year, during the Debate of Estimates at Parliament, on March 22.

The Prime Minister stated that drawing on the Revised Estimates for 2017/2018 it is evident that the government showed a marked improvement for that financial year with a primary surplus of one percent.

As such, during his address, the Minister for Infrastructure lauded the achievement.

“We are called upon today to debate and comment on the Estimates for Expenditure, for the fiscal year 2018/2019 as presented by the Minister for Finance and having been reviewed by the Standing Finance Committee of this House, and I must take this opportunity to commend the Minister for Finance for his stewardship, his exemplary and cautious behaviour in the application of the principles of management,” Minister King said.

He proceeded by detailing the performance of his own ministry over the last year. He pointed out that the challenges faced within the department included the execution of programmes within a limited timeframe.

“Only ten months since the passing of the last budget 2017/2018 and in review the period can be referred as one of challenge, but overcome by the inducement of the spirit of planning, programming dedication, and a determination to implement the work of the government, the Ministry of Infrastructure is one that has demonstrated that planning, that programming, that dedication, and determination to succeed. Our challenges were not the traditional ones of low financial resources to implement or facilitate the execution of programmes, but rather one relating to the ability to implement the programmes at a rate never experienced before. In fact it was a concern that begged the question, how do we deliver a first class quality road infrastructure and services to the people of Saint Lucia and adequately account for their taxes.”

The Hon. Minister Stephenson King added that the synergy between his ministry and that of the Ministry of Finance aided in yielding a positive outcome.

“I am obliged to thank the Minister for Finance who understood our plans. He bought into the vision and the ambitious programme of the ministry and placed the money where his voice reverberated, by introducing a fuel levy of a dollar and fifty cents per gallon dedicated to the reconstruction and maintenance of our aging road infrastructure here in Saint Lucia.”

The last day of the Debate of Estimates was on March 23.