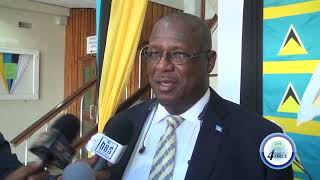 The member of parliament for Castries north Stephen King has been busy over the past few days setting the ground-work for what will be, a new leaf in his illustrious political career. As he prepares for his new political path, the former prime minister is unveiling his political colour, songs, slogans and symbol, which is said to be the umbrella. However, one critical element of Stephenson King’s preparation for his independent candidacy, is his conversations with his constituents.