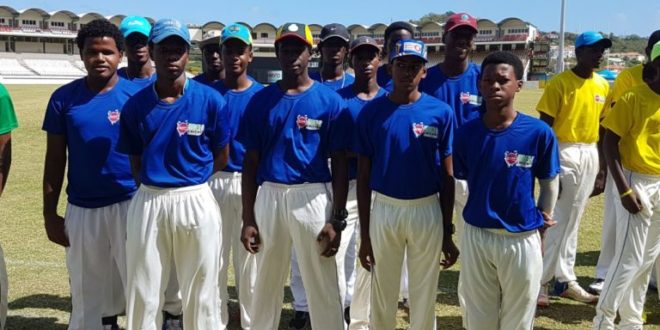 [Press Release] The Sandals Under-19 Inter-District Cricket Cup got off to an exciting start yesterday at the Darren Sammy Cricket Stadium, with Kimani Melius scoring a 17-ball fifty to guide Gros Islet to victory in the inaugural ‘Rama’ competition to launch the tournament.

While play officially gets underway next weekend, the four-over knockout tournament featuring eight of the competing teams was held on Sunday at Beausejour to mark the start of the three-year Title Sponsorship from Sandals Resorts International.

Before the game got underway, Sandals Saint Lucia Managing Director Winston Anderson handed over the sponsorship cheque worth close to XCD$19,000 to First Vice President of the Saint Lucia National Cricket Association Shaun Alcindor. The total sponsorship will be worth over XCD$30,000 per year.

“At Sandals we believe in helping to unlock the full potential of our young sportsmen and women. This is an investment in the future of Saint Lucia, and we are proud to partner with the Saint Lucia Cricket Association to provide the support you need to help you gain selection to the Windward Islands and of course the West Indies,” Mr. Anderson told the young players.

Meantime Mr. Alcindor welcomed the sponsorship, telling the young Under-19 stars that it was the first time the tournament had gotten such support in a very long time, and he urged them to make the best of it. He also appealed to the Saint Lucian public to come out and support the games. The fifty-over tournament bowls off around the country next Saturday.

In the Semi-finals Gros Islet made 57/1 to defeat Vieux Fort who put up a fighting 54/2, while Central Castries 65/1 defeated South Castries 43/2.

The final saw the best of young West Indies star Kimami Melius, who blasted 52 from just 17 balls to lead Gros Islet to 82/2 in just five overs. It was enough so see off the other finalist Central Castries, who could only muster 56/2.

Some of the other young stars on display included Sanjay Hale of Central Castries who took a hattrick during play yesterday; Dane Edward, Keghan Arnold and Germain Hardin

2018-03-12
Previous Commonwealth Day message of Her Majesty The Queen, Head of the Commonwealth
Next Transport Minister’s remarks “unfortunate” and could have “consequences” – N.A.D.S