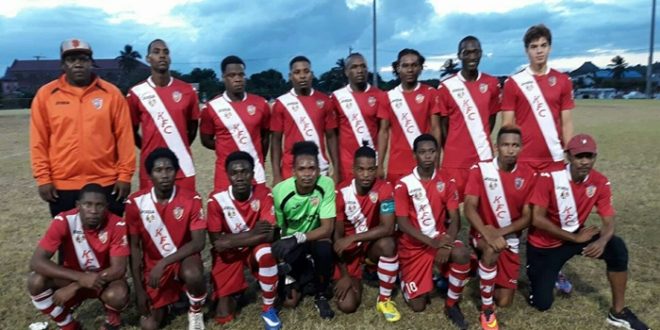 (PRESS RELEASE) – In a game many wished to have been a final saw KFC GMC United taking on Massy Northern United in the second SEMI FINALS of the Spider Cup 2017.

Both teams were outfitted with present and past national and district players. Both teams were coming into this second SEMI FINALS of the night UNDEFEATED in previous rounds of the competition. Hence, this game was always going to be a mouth-watering one.

KFC GMC United being the more defensive team while Northern United known for its attacking style of play, fans would witness a final before a final and therefore whoever won would most likely win the league on Sunday 3rd December.

Half ended: 1-0 in favour of KFC-GMC UNITED

The second half lived up to expectations as fans witnessed 45 minutes of nail biting football by the very best players in the league. Massy Northern United created at least 12 chances compared to KFC-GMC UNITED three (3) chances but one player of KFC-GMC UNITED was extremely determined to win this encounter.

Caster James, recently traded from Massy Northern United for grassroots player Jeremiah Justin of KFC-GMC was the man of the night. He saved at least six (6) match winning goals to keep his team up in this encounter. On a night where Massy Northern United’s “goal machine” (Troy Greenidge) was needed who scored four (4) of the eight goals in the Quarter-FINAL failed to live up to expectations. When the dust was settled it was KFC-GMC UNITED in the limelight and going into the Finals.

Notes: KFC GMC United has defeated two Northern United teams (A and B) so far this season and now headed to Finals to square off with Sports Locker/Domino Northern United which is actually called Northern C on the streets. Will they complete the demolition of the SLFA First Division Champions? Come witness the finals on Sunday 3rd December 2017 at the Gros Islet Playing Field from 6:00pm.