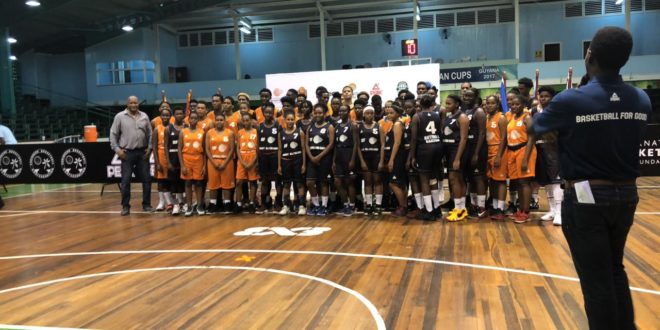 Press Release- SLBF- The male and female 3×3 teams sponsored by KFC/Real Foods St. Lucia left Saint Lucia on Thursday 18th October 2018 to participate in the 2nd annual IBF Antilles youth 3×3 Hoops Finals. Having qualified for the event, Saint Lucia was among the 14 teams from 9 countries who participated in a mandatory leadership workshop and tournament over a 3 day period. The event was organized to help develop, promote and increase participation of basketball within National Federations in the Lesser Antilles, giving opportunities to these countries with tremendous potential who do not often have the chance to travel to play basketball.

The tournament was hosted by the Guyana Amateur Basketball Federation. This year’s tournament was held indoor and each group consisted of 7 teams. Dominica unfortunately though qualified did not make it to the event. Team Barbados male and female won their respective categories with both teams beating Martinique in the Finals. Congratulations to both teams as they played very well throughout the tournament.

Team Saint Lucia returned on Monday 22nd, October 2018 with 3rd place bronze medals (females) and the males in 5th place. Both teams made it passed the preliminary round and entered quarterfinals. The female team defeated Team Antigua in quarters giving Antigua their first loss in the event 7-6 after being undefeated in the prelims and proceeded to Semis to face Barbados. The females had faced Barbados in the prelims and lost 10-4 and were determined to win in the semis and went all out however they fell short and lost 9-7 in the semis. The males were defeated by 1 point (7-6) in their quarterfinal match-up against Guyana and unfortunately did not make it to semis despite being looked at as one of the teams to potentially make it to the finals by the organizers.

Both teams played extremely well and impressively throughout the tournament. The St. Lucia Basketball Federation is proud of these young men and women who participated in the IBF Hoops Finals for their drive and efforts this past weekend. Male team this year performed much better than the 1st year landing them 5th overall and passed the first round, than 2017 when the team finished 8th and the females held onto a spot in the final top 3.

Saint Lucia did not come home with the 1st place trophies however we came home with a champion. Jean Pierre Frederick participated in the Dunk Contest and won with 2 impressive and remarkable dunks scoring total of 50 for the first and 48 for the second.

The Leadership Workshop was held over three days alongside the 3×3 tournament. The workshop, delivered by UK charity The Change Foundation, helped the players discover their leadership style and develop their leadership skills to empower them to use basketball for good in their communities.

The three days were inclusive of interactive basketball drills, leadership activities and discussions about using them to create social change.

The players were able to interact with one another as peers and develop new relationships as team mates even though they are opponents on court. They practiced public speaking skills, the art of negotiation and influencing as well as understanding the importance of strategy, decision making and inclusion in becoming a true leader.