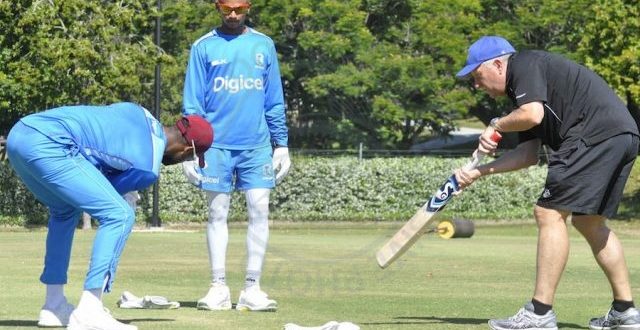 CHRISTCHURCH, New Zealand – Head coach Stuart Law is expecting a tough challenge from the Black Caps in the upcoming two-Test series but believes the conditions there will still favour the West Indies brand of cricket, as they look to spring a surprise on the home side.

The Caribbean side are coming off a 1-0 win over minnows Zimbabwe in a similar two-Test series earlier this month in Bulawayo but nevertheless struggled on the low, slow wickets there.

With the bouncier pitches in the southwestern Pacific expected to provide better surfaces for stroke-makers and seamers, West Indies are confident of lifting their performances.

“[The series win against Zimbabwe was] in difficult conditions, really slow, low pitches. Didn’t really suit our style of play but we’re looking forward to the wickets we get here in New Zealand,” Law told reporters today.

“They’re a very aggressive team, they love playing aggressive cricket. Our boys are really looking forward to that challenge. It’s very similar to what we faced in the UK earlier in the year as well. We didn’t win the series but we won the second Test match and we made great strides, which is what we’re trying to do.”

Law said resurgent seam bowler Kemar Roach and speedster Shannon Gabriel had found life difficult on the flat pitches in Zimbabwe, with even leg-spinner Devendra Bishoo struggling with the slowness of the turn.

With the two Tests  scheduled for the Basin Reserve in Wellington from December 1-5 and at Seddon Park in Hamilton from December 9-13, Law said his bowlers were relishing the chance to exploit these surfaces.

“They are looking forward to these conditions that will probably suit the way they want to play better,” he pointed.

“Normally in New Zealand, they back their quicks and their batters to play on wickets that have a bit in it. It’s a bit more of a contest between bat and ball which not only livens up the game of cricket but also promotes good skill and better learning.

“We’re not expecting them (pitches) to be flat roads, we’re expecting wickets that have a little bit of life in them. That’s what we’re looking forward to.”

“[The pitches] are going to help [our bowlers] more than the ones in Zimbabwe did, playing in Bulawayo. Hopefully the ball does bounce above knee height and gets through to the wicketkeeper on the first bounce,” Law laughed sarcastically.

“But we’re prepared for any sort of conditions. Traditionally here they do have a little bit more grass on [the pitches] than most places around the world and we look forward to that.”

Law was however under no illusions that the West Indies would be up against very tough opposition especially in home conditions.

The Windies haven’t beaten New Zealand in an away Test since 1995 when greats Brian Lara, Curtly Ambrose and Courtney Walsh were in their pomp. The last time they toured the country in the summer of 2013-14, they lost the three-match Test series 2-0 and Law labelled the Black Caps firm favourites.

“Beware of the dog, in their own backyard as well. They’re a very tough side. We know that they’re going to be highly competitive in conditions they’re very comfortable in and understand wholly and solely,” he said.

“[New Zealand] always provide a great contest no matter who they play against. They tend to grow 10 foot tall and become bullet proof. We know we’ve got it tough, but I’m confident that our boys can give a really good account of themselves.”

The West Indies top five is a work in progress with a vacancy at the crucial No.3 slot following the axing of Kyle Hope, the only change from the Zimbabwe tour. Shimron Hetmyer, the attractive attacking left-hander who debuted against Pakistan or newcomer in the squad Sunil Ambris will be seeking to fill that void if either is given the opportunity.

Law spoke favourably about opener Kraigg Brathwaite and Hope’s younger brother, Shai, who both made valuable runs in England and would be integral to their batting fortunes.

Facing the experienced new ball combination of Tim Southee, Trent Boult and workhorse Neil Wager will be a stern challenge, but one they shouldn’t be intimidated by.

The West Indies having previously struggled in New Zealand, Law is determined to see his side, who sit eighth in the world test rankings, take matches deep into day five, which should mean they’re in contention.

“That’s No.1, you try and draw it out as long as you can. The longer you stay in the contest, the more chance you have of winning.

“The past is the past. We’re not looking backwards. We’re looking forward.”

The side are preparing for their only warm-up game of the series, a three-day fixture against New Zealand A in Hamilton starting Saturday, and Law said the Windies were in good spirits.

“We’re fully here and appreciative of the opportunity to come here and play New Zealand as well. We’re here fully fit so looking forward to getting cracking.