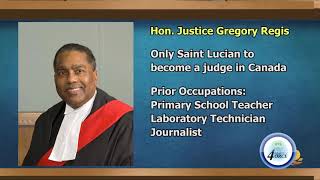 Saint Lucian-born retired justice in Canada Gregory Regis will join human rights advocate and nobel prize winner Malala in receiving an honorary degree from a prestigious university in Canada. The former CBC-TV director was a trail blazer in the Canadian justice system who broke a number of racial barriers on his way to one of the highest courts in Canada.