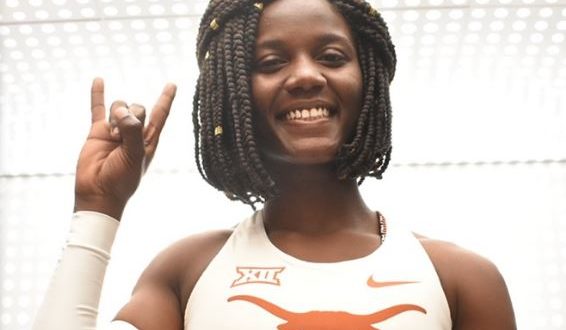 Terry Finisterre- Just a fortnight ago, Julien Alfred — aged just 18 this year, and still shy of her birthday — set new national standards for Saint Lucia in the women’s 100m and 200m sprints.

Now, she has vaulted herself into world-class conversation with a new national record in the 200m, and a new personal-best mark in the 100m, invalidated only by an illegal tailwind.

Competing at the 2019 Big 12 Outdoor Track & Field Championships, on the John Jacobs Track Complex in Norman, Oklahoma, USA, the St Catherine High School (Jamaica) and Leon Hess Comprehensive Secondary (Saint Lucia) alumna was part of two sprint sweeps for the University of Texas. The UT freshman placed second in the 100m and was third in the 200m.

In the 200m, Alfred clocked a massive 22.90 seconds for bronze, behind teammates Teahna Daniels (22.71) and Kynnedy Flannel (22.71). That time is within the qualifying marks for the IAAF World Championships in Doha, Qatar, later this year. With a legal wind of 1.2 metres per second, it is also a new national record for Saint Lucia, supplanting Alfred’s 23.37 from a few weeks ago.

The time also moves Alfred up from 48th to the 15th fastest woman in the world over the half-lap, the fourth-fastest under-20 girl (a hundredth of a second back of Jamaica’s double World Junior Champion and double CARIFTA champion, Briana Williams), and the sixth fastest woman ever from the Organisation of Eastern Caribbean States, OECS.

In the 100m, Alfred and her teammates benefited from a 2.1 m/a tailwind, as senior runner Daniels copped double gold in a time of 11.10, and freshmen Alfred and Flannel stopped the clock in 11.21 and 11.37, respectively.

Texas would go on to win its 14th 4x100m Outdoor conference title, with a team consisting of three freshmen — Kennedy Simon, Alfred, and Flannel, along with Daniels.