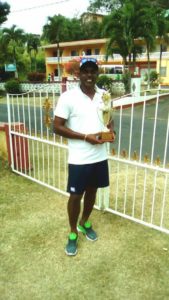 [Press Release] The Eagle Freight Adventist Premiere League is proud to welcome John Eugene to the tournament. John Eugene is a St Lucian Born cricketer who played for the Windward Islands in the late 80’s early 90’s.

He scored a first class century against Barbados in the Red Stripe cup and was selected for the West Indies under-23 team which hosted Australia in the early 90’s. He then advanced to the West Indies A Team which played against England’s A team during the 1990-1991 season. Mr. Eugene was selected to the St Maarten National Cricket team in the 2006 where he scored a remarkable century in the Stanford t20 tournament.

Since then, he has captained several teams in first division cricket in St Lucia and continues to be prolific with the bat.

John Eugene has coached the national under-fifteen team and continues to play pertinent roles in local domestic cricket. He will be playing his first EF APL match for the North Eastern Veterans on the 19th of April at 7:00pm at the Gros-Islet playing field.

The EF APL has garnered interest and participation from other national players such as Dan-Rhaj “Chaz” Cepal, Johnell Eugene son of John Eugene, Mervin Charles and even former Canadian national player Patrick Clarke.

The EF APL has also been graced with participation from politicians such as Guy Joseph and Guibion Ferdinand. The EF APL is making great strides in becoming a leading tape ball cricket tournament in St-Lucia and will continue to welcome prolific talent such as that of John Eugene.