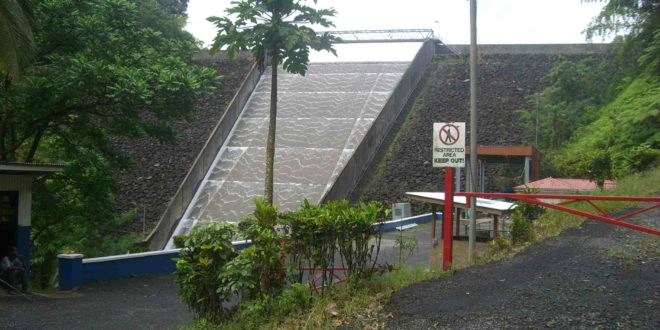 [Press Release] Works are progressing on the construction of the Sediment Disposal Area (SDA) at the John Compton Dam.

The project which was awarded to Mega Contracting, is but the first phase of the desilting process at St Lucia’s largest reservoir. The works began in May this year following the approval of part-funding by the Caribbean Development Bank CDB.

On Wednesday August 5th 2018, a delegation from the Water and Sewerage Company WASCO which included the Minister for Agriculture, Fisheries, Physical Planning, Natural Resources and Cooperatives, Hon. Ezechiel Joseph, Chairman of the Board of Directors at WASCO, Francis Denbow, Wasco’s General Manager Edmund Regis and Head of Wasco’s Project Management Unit, Gordon Wyke as well as representatives of Golder and Associates, Engineers and Consultants on the project, visited the site to get a first-hand view of how the project is advancing.

The delegation also got an opportunity to sit with the project manager and engineers, who provided a general assessment report on the works and further explained the various aspects of the job which has been divided into two phases.

They informed that the site for the dyke has been stripped and prepared and the foundation for the structure is currently being laid. A seepage trench and a blanket drain is being constructed below the dyke is nearing completion. The first part of the works, which is the foundation of the dyke is expected to be completed by November 2018 and the construction phase is projected to commence in January 2019.