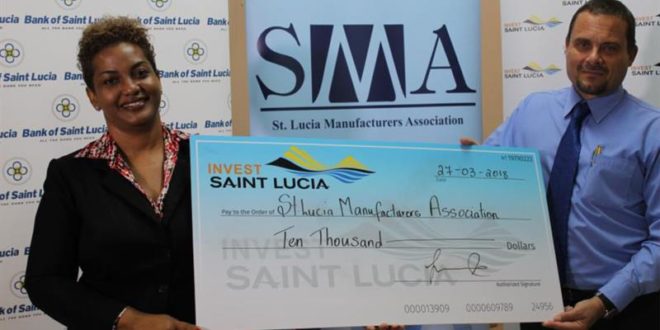 As the agency responsible for promoting investment, Invest Saint Lucia (ISL) has thrown its support behind the St. Lucia Manufacturers Association (SMA) as a Platinum Sponsor for the 2018 installment of the association’s bi-annual awards.

Manufacturing is one of the key sectors of focus for ISL. The agency proactively promotes both traditional and smart manufacturing; the latter entails using technological advancements to make the manufacturing process more efficient.

Invest Saint Lucia has a strong history of attracting investment in this sector and the island has significantly diversified its manufacturing base over the last couple of decades, producing a range of award-winning products including food and beverages, condiments, corrugated cardboard cartons, handicraft, sporting goods, furniture, metal sheeting, apparel and souvenir items, among others.

One of the key opportunities that ISL has been actively promoting in the last few years is the manufacturing of pharmaceutical products including the use of local biodiversity for developing traditional/herbal medicines. ISL will continue to follow this trend as it works closely with not just the SMA, but with the St. Lucia Bureau of Standards (SLBS) and the Trade Export Promotion Agency (TEPA), to create and sustain an enabling environment to stimulate the growth of the sector and spur its expansion.

In related developments, ISL recently assisted at least three local manufacturers with their expansion efforts – Alwin Investment Inc. which purchased a 7000 square feet factory shell in Union to increase the production of pasta for the local and regional markets. TA’s Distribution and Trading was also supported through the renovation and lease of a 10,000 square feet factory shell in the Vieux Fort Industrial Estate which now makes it easier for them to consolidate their services and increase the distribution of “Mags” refined coconut oil using locally produced copra. Additionally, Brice & Co. acquired a 9,800 square feet factory shell located in the Vieux Fort Industrial Freezone which now enables the company to add more value to the construction industry in Saint Lucia and the region.

ISL’s support does not only extend to the more established businesses, but to the budding entrepreneurs as well. ISL’s sponsorship of the Young Entrepreneur Award during the annual Chamber of Commerce Awards, is proof positive of its commitment to the sector and its sustainable development.

Johanan Dujon, creator of Algas Organics has been one of the recipients of this award and ISL continues to assist the young entrepreneur in his bid to advance his going concern. The SMA and ISL have maintained a solid relationship over the years with both organisations aiming to promote excellence and quality within the sector by raising the awareness of Saint Lucian products in the market place, through various promotional efforts.

The fourth bi-annual SMA Quality Awards is just one such avenue that affords local manufacturers the opportunity to enhance their facilities and develop excellence in various skill sets such as leadership; implementation of standards and best practices; product and customer service quality; marketing strategies; human resource development; social responsibility and eco manufacturing.