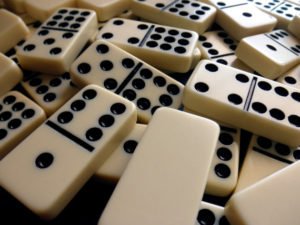 (PRESS RELEASE) – The St. Lucia Chamber of Commerce Domino Championship is moving into its final week of commercial action and four teams in each phase will be moving unto the next phase of the competition.

Group games have concluded with St. Lucia Fire Service, M&C Home Depot, Ferrands Food Products and Ministry of Infrastructure moving on to the next phase of the competition, knocking out St. Lucia Distillers, Sagicor, Flow and WLBL.

Group B: LUCELEC vs Windjammer vs PCD-Smirnoff