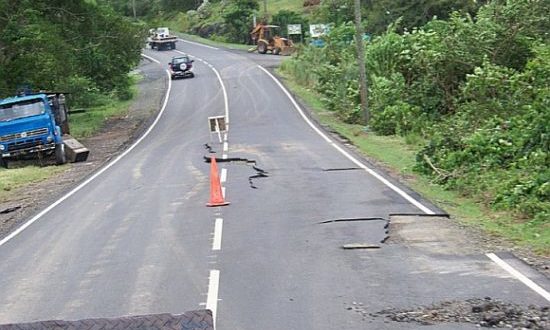 [Press Release] The Government of Saint Lucia has secured a grant from the United Kingdom Government in the amount of £30M or $115M Eastern Caribbean Dollars.

The reconstruction of the Millennium Highway and the West Coast Road is being financed through grant funding from the United Kingdom Caribbean Infrastructure Partnership Fund (UK CIF).

This disclosure was made by Minister for Infrastructure, Ports, Energy and Labour, Honorable Stephenson King during the 2018/2019 Estimates of Revenue and Expenditure Debate.

Minister King told the nation, Government has taken a policy decision to invest those grant funds to improve important national infrastructure which will help to contribute to the economic development of the country.

As a result, the Millennium Highway and the West Coast Roads are earmarked for major reconstruction.

The Millennium Highway which was constructed in 1996 has since that time not undergone any significant maintenance. Major sections of the West Coast Road are also in dire need of upgrade.

According to the Infrastructure Minister, once these two roads are fixed, Government can now facilitate greater levels of economic activity for the South and in so doing bring greater hope and prosperity to the people of Saint Lucia.