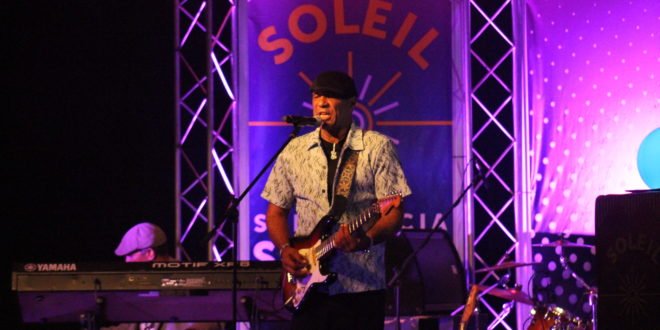 The Soleil Saint Lucia Summer Festival [SSLSF] continued in September with the debut of the County and Blues Festival.

The Events Company of Saint Lucia Inc. [ECSL] – chief organizers of [SSLSF], is hosting the inaugural Blues Festival at the Sandals Halcyon resort, which is scheduled for two nights from September 28 to 29.

Headline acts included internationally recognized jazz and blues musicians of Saint Lucia heritage such as Carl Gustave and, Brandon ‘Taz’ Neiderauer along with Shemekia Copeland and Clark Beckham from the United States.

ECSL was forced to postpone the Country music concert due to scheduling issues with the targeted headline act[s].

ECSL Chief Executive Officer Thomas Leonce sat down with HTS News4orce on opening night to discuss the prospects of the Country and Blues Festival. Leonce explained despite a ‘last minute’ hitch with the Country component of the festival, the event is encouraging. [Watch video]

The ECSL CEO disclosed, SSLSF will likely extend beyond the previously arranged six [6] month timeline from May to October due to various challenges.

Creole Heritage Month is next up under the ECSL brand scheduled for October.