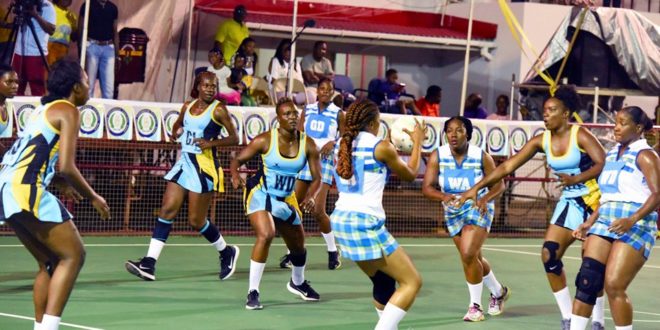 Basseterre, St Kitts and Nevis – Five netball teams from across the OECS will compete for the first Gloria Ballantyne Championship Trophy in the inaugural OECS/ECCB International Netball Series, which will be held in St Vincent and the Grenadines from
15 – 21 June.

The Eastern Caribbean Central Bank (ECCB), in collaboration with the OECS Commission, the Caribbean Netball Association and the St Vincent and the Grenadines Netball Association, will host the OECS/ECCB International Netball Series under the theme: Excellence and Empowerment Through Sports.  This Series replaces the OECS/ECCB Under-23 Netball tournament, which the ECCB sponsored from 1991-2018.

The ECCB’s sponsorship of the OECS/ECCB International Netball Series demonstrates the Bank’s vision of fostering regional integration and its commitment to the overall development and empowerment of the region’s women through sports.

Governor of the ECCB, Timothy N. J. Antoine said: “The ECCB remains fully committed to the development of our young women through the sport of netball. After 28 years of sponsorship, our Bank is pleased to help take the sport to a higher level through enhanced support for the launch of the International Netball Series.”

The OECS/ECCB International Netball Series will provide the participating teams with the opportunity to play international netball matches and gain world netball ranking. It will also highlight elite netballers in the OECS on the international platform and establish pathways for OECS netballers to enhance their competence in the sport.

The Series will commence with the Official Opening Ceremony on 15 June, following which teams Antigua and Barbuda, the Commonwealth of Dominica, Grenada, Saint Lucia and St Vincent and the Grenadines will compete for netball supremacy at the Arnos Vale Sporting Complex. The championship trophy is named in honour of Gloria Ballantyne of St Vincent and the Grenadines, who has been influential in regional netball for several decades.

The netballers will also participate in a developmental session on the theme: Charting a Course: A Financial Guide for Women. Villette Browne, Managing Director of the KP Group of companies in St Vincent and the Grenadines, will conduct the session. They will also have the opportunity to engage in discussion with the netball officials about the future of the sport in the region.

Visit the ECCB Facebook page (https://www.facebook.com/ECCBConnects/) for daily updates on the matches throughout the tournament.