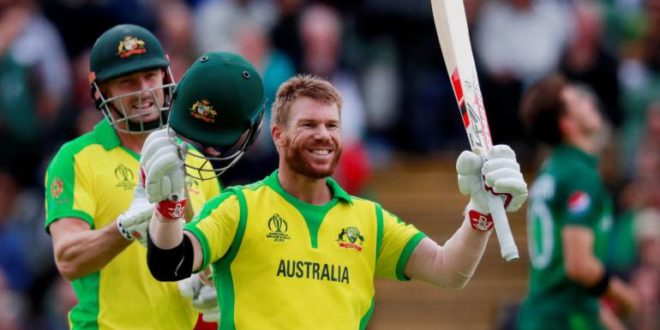 BBC- David Warner scored his first international century since serving a year-long ban for his part in the ball-tampering scandal in Australia’s tense 41-run World Cup victory over Pakistan.

Warner, transformed from the man who struggled in Sunday’s defeat by India, busied his way to 107.

With captain Aaron Finch also clubbing 82, Australia should have posted more than their 307 all out, only to lose their last six wickets for 30 runs thanks mainly to Mohammad Amir’s 5-30.

Facing a more reachable target than they would have once feared, Pakistan were well placed at 136-2 when their own collapse of 4-24 sucked the life from the chase.

Hassan Ali hammered 32 from 15 balls and Wahab Riaz 45 from 39 balls to revive their vociferous fans, but after Wahab was given out caught behind on review off Mitchell Starc, Pakistan were bowled out for 266.

Pakistan stay eighth in the 10-team table and move on to play arch-rivals India at Old Trafford on Sunday knowing that another defeat would go a long way to ending their involvement in the tournament.