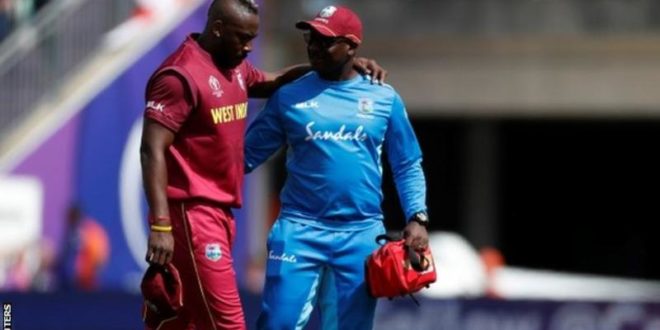 BBC Sport- West Indies all-rounder Andre Russell has been ruled out of the rest of the World Cup because of a knee injury.

Russell had been struggling with a left knee problem throughout the tournament and missed two of their six games.

The 31-year-old took five wickets in four matches but only scored 36 runs across three innings.

He will be replaced in the squad by batsman Sunil Ambris for West Indies’ final three matches, starting with their match against India on 27 June.

West Indies were all but eliminated from the World Cup by their dramatic loss to New Zealand on Saturday.

They are eighth in the table with one win from six matches, five points behind fourth-placed England in the last semi-final place.