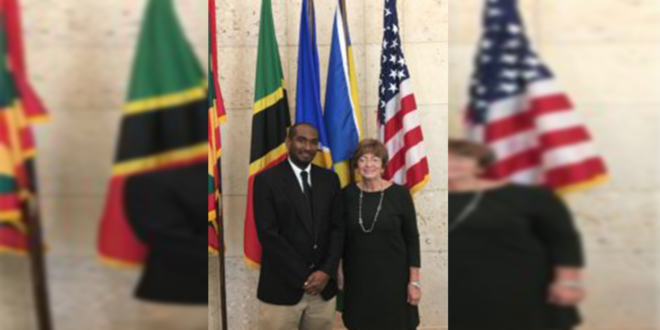 He is taking part in the prestigious “Edward R. Murrow Program for Journalists: New and Traditional Broadcast Media” from May 14 to June 1.

Mr. Springer has worked at HTS for the last 17 years, and in his current role as news editor, he leads a small newsroom of young, vibrant, and talented journalists. He also trains his young reporters in objective, fair, and accurate reporting.

The IVLP program in which he is participating aims to illustrate how new technologies shape the way news is gathered, reported, distributed, and consumed; explore the crucial role of responsibility and accuracy in reporting in a democracy and the emergence of “fake news” and the efforts of fact checking groups. Participants will also examine how broadcast media influences and reflects American society; examine the influence of social media and digital technologies on how citizens use and share information; and explore the current and potential contributions of broadcasting to the formation of an informed citizenry within a diverse, democratic, and decentralized society.

The cohort, which includes journalists from Rwanda, Pakistan, Moldova, and Mauritius, will examine the history, structure, and function of broadcasting in the United States and the challenges and opportunities posed by social media. They will also examine the influence of radio, television, cable, and new technologies in a pluralistic, decentralized, and democratic society. The project will also address journalists’ ethical responsibility for accurate reporting in an information environment that is increasingly complex.

The program began on May 14 in New York, New York, and includes travel to San Francisco, and Sacramento, California. Participants will then be divided into teams and travel to four cities across the United States including Albuquerque, New Mexico; Lincoln, Nebraska; Tulsa, Oklahoma; and St. Petersburg, Florida. The group reconvenes in Washington, D.C, where the program ends on June 1.

The IVLP is the Department of State’s premier, professional exchange program. The program brings together emerging leaders in their respective professions to learn how U.S. experts in that profession operate and to share best practices with the other program candidates who hail from the same region and across the globe.