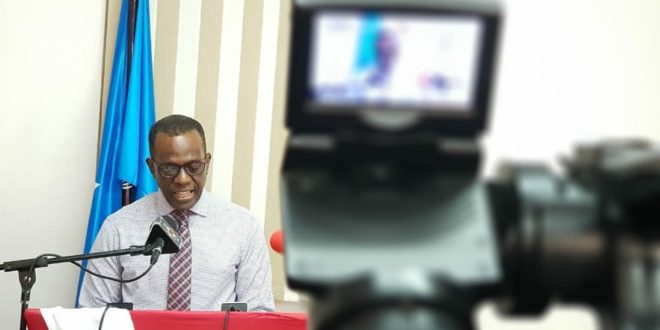 [press release] There is no doubt that as a nation we are faced with numerous challenges in the health system. When in government the Saint Lucia Labour Party experienced first-hand the situation and took positive steps to improve health care.

In 2002, we commenced and later completed the National Wellness Centre to ensure more humane treatment for our mentally ill citizens. In 2002 a decision was taken to construct a new Hospital. After a review of existing plans to rehabilitate Victoria Hospital built in 1887. Construction of the new national hospital (OKEU) commenced in 2005.

The OKEU Hospital was not completed during the UWP term of office from 2006-2011. I repeat that the UWP did not complete the OKEU Hospital in the five (5) years between 2006 and 2011, despite the fact that European Union funding was already available. Yet when SLP came ASSUMED OFFICE in 2011 it never stopped work. Instead it continued work, bringing the Hospital to completion. Not a day was wasted by the Labour Government bellyaching about UWP not completing the hospital. Like we did with the St. Jude Reconstruction project – WE KEPT WORKING.

This is what responsible a government does. IT DOES NOT PLAY RECKLESS GAMES WITH THE LIVES OF ITS CITIZENS.

By April 2015, progress on commissioning of the OKEU was progressing and a new director was appointed. All major construction work had been completed by February 2016 and ancillary works were in progress. All equipment had been procured and expected to be installed, commissioned and training completed by September 2016.

On September 9th 2009, during the UWP term of office there was a fatal fire at the St. Jude Hospital in Vieux Fort which forced St. Jude Hospital to be displaced and temporarily housed at the George Odlum Stadium.

The SLP was voted out of government in June 2016. At that time the OKEU was not fully commissioned nor was the St. Jude Hospital completed. One of the main promises made to the electorate by the UWP was to complete and occupy both hospitals and to improve the health care system as an immediate and urgent priority.

How has the UWP government fulfilled its promise in its 26 months in government?

– Work was stopped at the St. Jude Hospital and has been for the last two years;

– Then the Government commissioned a Technical Audit on the re-construction of St. Jude Hospital costing almost $1 million. To date the Report has not been tabled in Parliament even if it has been leaked to the media.

– Then the Government announced that it was going to demolish St. Jude Hospital because it did not meet international standards;

– Then the Government retracted saying that only parts of the Hospital would be demolished;

– The Government later announced that a new Hospital adjacent to the existing St. Jude Hospital site would be constructed

– It was then announced that Government was discussing the privatisation of OKEU with several interested parties.

– However, media reports were that Government was in final negotiations with Health City Cayman to take over the management and operations of the Hospital.

– It was then reported that Health City Cayman on taking over the operations of OKEU wished to have a clean slate including the right to hire their own staff and personnel. The Government denies this.

– The Government announces that it intended to implement a Universal Health Insurance Scheme and was discussing the scheme with a number of companies. No details are given.

– The Prime Minister announces that national insurance premiums will be increased to help fund the Universal Health Insurance. It is announced that every Saint Lucia will receive $100,000 coverage with Government paying the premium for the poor, children and elderly.

– The poor state of the George Odlum Stadium becomes a major cause of concern. The rapidly deteriorating conditions results in the then Chairman of the Board of St. Jude Hospital calling the facility ‘a hell hole’. The Chairman Dr Ulric Mondesir a former UWP candidate resigns.

– The Government agrees to do some remedial work costing $12M as announced by the Minister of Economic Affairs. The work was poorly planned causing major hazards to the health and safety of patients and personnel. The Labour Department stopped the work. At least one doctor is hospitalized for negative reactions to fiberglass like material removed from the roof of George Odlum Stadium.

– And only on Monday we heard the Prime Minister present an update. It appears from what the Prime Minister was saying that the Victoria Hospital will not be closed. Instead we will be entering into a joint venture with Health City Cayman to turn OKEU into a tertiary health institution offering in his words, “services that currently don’t exist in Saint Lucia”!!! The Prime Minister also explained that our population cannot sustain a tertiary level hospital. The only way we can commission the OKEU Hospital in Saint Lucia is to have medical tourism. It appears that the OKEU Hospital will be used primarily as a hospital for medical tourism.

This is a chronology of confusion, failure and gross incompetence. The health system is a deep, deep crisis. The Government has approached the health care of the people with insensitivity and callousness. Whilst Saint Lucians are dying, yes dying according to doctors because of the state of our health system, the Government is toying with misconceived ideas and playing with the assets and health of the people.

The UWP government is victimizing and attempting to divide medical professionals who are expressing concern at the state of health care in our island. Our nurses continue to be concerned about their future tenure in the system.

We need to stop this Government. We need to send a clear signal that the people of Saint Lucia cannot take it anymore.

Therefore on September 9, we will assemble on the Vigie Playing Field and march to the Market Steps to send a collective statement to the Government that we can’t take anymore.

We need the completion of the West Wing at St. Jude Hospital site to allow the Hospital to be removed from the George Odlum Stadium.

We need the St. Jude Hospital to be completed;

We need a complete commissioning of the OKEU to serve as a national hospital offering affordable and accessible health care for all;

We need the establishment of a National Health fund that will provide for the financing of a Universal health care system.

The National Healthcare Crisis continues to stagnate and worsen as this administration finds itself hamstrung and unable to advance its health mandate promised to the people of Saint Lucia. It is yet to put forward to the public a policy document with its plan to resolve this crisis. Lack of Public consultation on healthcare continues to be a matter of serious concern.

The time has come to publicly hold this UWP administration accountable for this lack of transparent progress on healthcare. The public must be honestly informed and assured of the way forward on healthcare with immediacy.

While the health crisis intensifies the recklessness of the UWP government is manifested in many other senseless decisions like Range, Hewanorra Airport Loan and increase in gas taxes. This madness must stop.

Let us demonstrate that we will not allow the bleeding of our nation to continue. Let us take a stand on September 9th, 2018.