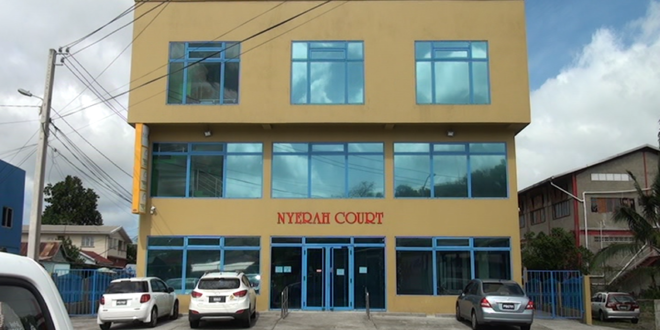 [Press Release] Nyerah Court to be made more conducive for workers

A more conducive workplace is on the agenda for the members of the judiciary and staff of Nyerah Court on the John Compton Highway.

This development follows recent calls by the staff of the criminal court for a review of their working conditions.

On Tuesday, April 24, 2018 Minister of Home Affairs, Justice and National Security Senator the Honourable Hermangild Francis undertook a walk –through of the space along with officials of the court and a design expert within the Public Service.

Minister Francis says the staff has made certain requests and the process of addressing their concerns is under active consideration. The next step he says is to discuss the cost implications with Prime Minister Allen Chastanet who is the Minister of Finance.

Minister Francis explained: “I have visited Nyerah Court and I don’t think it was really configured to be a courthouse; and so the judges and staff have actually been working there under a lot of stress. I have also met with Justice Francis Belle, Justice Price Findlay, the Director of Public Prosecution Mr. Daasrean Green and the Registrar of the High Court   Ms. Charon Gardner-Hippolyte on the way forward. The meeting was quite productive. We are proposing a lot of internal changes; and one of those is to utilize the entire building so that we will have a court each floor.”

Apart from structural changes, Minister Francis noted that the security detail of the court will also be strengthened.

Meantime, the National Security Minister says Government has made some significant inroads in relation to the establishment of a Hall of Justice which will boast a judicial complex housing several courthouses along with the relevant administrative and support services.

Matters before the High Court are currently being adjourned.