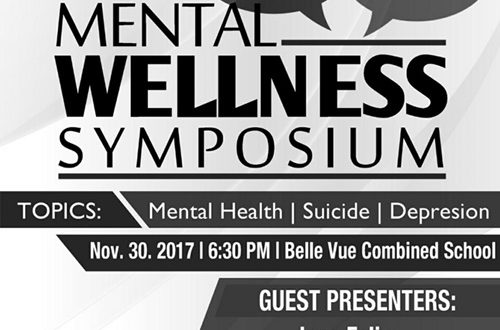 (PRESS RELEASE) – Holistic Youth Empowerment has organized a Mental Health Symposium which will be held at the Belle Vue Combined School on November 30th 2017 from 6:30 p.m to 8:00 p.m.

During this Mental Health Symposium, Mr.Julius Gillard,  a mental health doctor will address the issue of suicide and Miss Jana Felix, nurse at the National Mental Wellness Hospital, will address issues related to depression.

After the presentation, by the professionals, the audience will be invited to dialogue with the presenters to address issues of their concern. Thus, it is against this backdrop that Holistic Youth Empowerment cordially invites the residents of Belle Vue, Vieux-Fort North and environs to this very important Mental Health Symposium.

This activity is being implemented in light of the many psycho-social issues which adversely impact the lives of Saint Lucians. Despite the fact that mental health is treated with silence, the incidence and pervasive impact of suicide, depression and other mental illnesses indicate that mental health is an issue which should be discussed and addressed in an urgent and comprehensive manner.

As such it is hoped that through this Mental Health Symposium, the general public will gain a greater understanding of mental health issues and an appreciation of the role they can play in creating a supportive environment for those who suffer with mental illness and their families.

Holistic Youth Empowerment is a not for profit youth organization from the community of Belle Vue which was formed in 2017. This organization was established to create an avenue for youth in Belle Vue, Vieux-Fort to harness their skills, talents and positive energies and invest such in community and youth development initiatives.

Accordingly, this organization intends, among other things, to increase  public awareness as it relates to the health and social issues affecting the livelihoods of individuals, particularly youth.