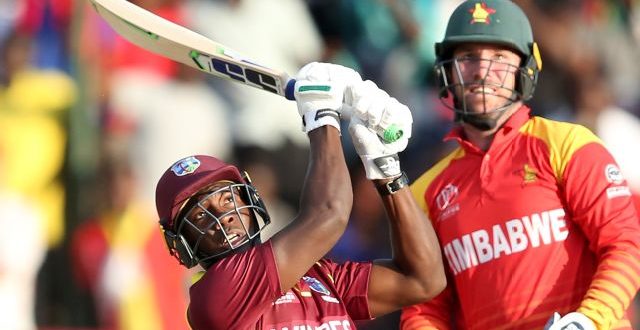 Clinching close matches and playing out last-gasp finishes have become a habit for Zimbabwe in this tournament. For once, however, the result went against them as West Indies won by four wickets to record their fifth-highest successful chase in ODI history. This meant they were well in control of their fate heading into their final group fixture against Scotland. Zimbabwe, meanwhile, faced a must-win in their final Super Six fixture against UAE.

Brendan Taylor scored his 10th one-day international hundred to propel Zimbabwe to 289, a total that could’ve swelled further if not for a controversial no-ball call that resulted in Sikandar Raza’s wicket. In response, West Indies lost Chris Gayle early, but a 135-run third wicket stand between Shai Hope and Marlon Samuels tipped the chase in West Indies’ favour. Late wickets raised hopes of an unlikely comeback for Zimbabwe, but Rovman Powell‘s nerveless cameo helped avoid any last-minute hiccups as West Indies won with an over to spare.

West Indies’ hopes hinged on a quickfire Gayle start, but Zimbabwe may have entertained hopes of extending their unbeaten run in the tournament when he was out slicing to third man off Blessing Muzarabani in thw sixth over. But Hope and Lewis saw the shine off the ball and cashed in on anything loose.

Lewis did bulk of the scoring in a partnership of 72 with Hope. But when he played too early, and with hard hands, to give Sikandar Raza a simple caught-and-bowled chance in the 22nd over, Zimbabwe sensed an opportunity. This was however extinguished slowly as Samuels and Hope, who built a platform and went berserk after digging in.

The bounce in the track took the bite out of what is usually Zimbabwe’s strength: their spinners. Deliveries that might have shot through at the shins in Bulawayo stood up on this hard surface, and Samuels’ first three boundaries all came off long hops. Adjusting their lengths with the field spread, the spinners didn’t concede a single boundary between overs 26 and 35, but the floodgates opened soon.

Hope’s umpteenth single took him to a 71-ball fifty in the 34th over and, seemingly taking that as his cue, Samuels immediately shifted from second to fifth gear. Raza’s offspin was flambeed over long off for two enormous sixes, and Samuels then added two more sixes and a four to take 18 off an over from Cremer. The game turned then and there.

But as they got closer, West Indies let it slip briefly. Samuels started to cramp up his mobility at the crease suffered. He swiped two more brutal boundaries off Muzarabani, but then pushed flat-footed at one that left him off the pitch to be well caught by a tumbling Taylor behind the stumps. Then, Jason Holder fell. Zimbabwe smelt an opportunity. But with two overs to go, West Indies needing 11, Powell boldly stepped out to hit Sean Williams for six over long on to close out the game.

Earlier in the afternoon, Taylor had work to do when he first got to the crease this morning. With Cephas Zhuwao gloving to fine leg, Hamilton Masakadza removed by a brutal lifter from Holder and Solomon Mire forced to retire by a bouncer that struck him on the right side of his helmet grille and forced him off the field because of blurred vision, Zimbabwe were effectively 30 for 3.

Craig Ervine helped steady the innings with Taylor, while Sean Williams helped to hoist the mainsail with a bellicose 34 at better than a run a ball. Together they helped to keep Zimbabwe ticking at five an over, or thereabouts, but it wasn’t until Raza joined him at the crease that Taylor really began to let loose. Together they rattled along with a boundary an over, with Taylor fittingly reaching his hundred with a reverse sweep.

Raza was given out in controversial circumstances when he was out bowled, only for replays to suggest no part of Holder’s foot was behind the line. The third umpire, however, gave Holder the benefit of doubt to shock a strong home crowd It was a moment that may have well cost Zimbabwe the 20 extra runs they desperately needed at the end.