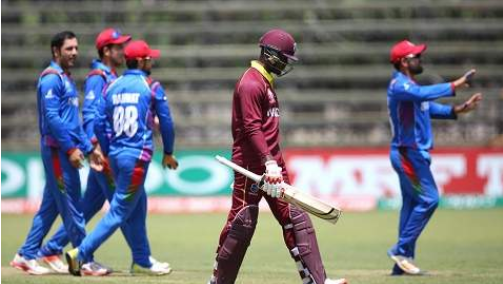 (CMC) – Captain Jason Holder on Thursday warned against panic after another surprise defeat to Afghanistan left West Indies facing a precarious path to qualification for next year’s World Cup in England.

West Indies carried four points from their unbeaten campaign in the preliminaries into the all-important Super Sixes second stage, but crashed to a three-wicket loss in their opening match, to slip to second in the table.

Scotland top the standings with five points after crushing United Arab Emirates by 73 runs, one point clear of West Indies who will now face a must-win encounter on Monday against hosts Zimbabwe, a point behind in third.

“We’re going to [focus] first on the first game against Zimbabwe. That’s obviously a must-win game for us,” Holder told reporters following the three-wicket defeat at Harare Sports Club.

“We’ve got to put our foot down now and try and qualify for the finals and once we do that, we have obviously qualified for the 2019 World Cup.

“But it’s important that we take it step by step, game by game and I think our encounter is against Zimbabwe so we’ve got to deal with them first.”

West Indies produced easily their worst performance of the World Cup qualifiers, struggling to 197 for eight off their 50 overs, after opting to bat first.

In reply, Afghanistan recovered from 17 for two courtesy of a composed 68 from Rahmat Shah, to reach their target with 14 balls remaining.

“I felt we were 20, 30 runs short after the foundation we had laid. Credit must go to the Afghan bowlers, I thought they bowled really well and at the back end of the innings we were just struggling to build some momentum,” Holder said of his side’s batting effort.

“It’s cricket. We had a few scores over 300, we had a pretty good chase as well and I guess it’s one of our weaker batting performances for the entire tournament so far.

“I wouldn’t start to panic, I think it’s a situation for us just to regroup. We’ve got a few days off and I expect really good things against Zimbabwe.”

West Indies started the tournament as favourites and have lived up to expectations, hardly troubled throughout their preliminary round campaign.

And Holder said he expected the same team approach that had gotten them success so far, to continue in their remaining matches against Zimbabwe and Scotland, who they play next Wednesday.

“One thing about this team I’ve seen is that we’re full of confidence,” the all-rounder said.

“A lot of guys are stepping up at different stages of the tournament and it’s good to see that not just one or two individuals have carried the team on their backs but it’s been a wholehearted team effort. It’s really good to see in a tournament like this.”

2018-03-16
Previous Proof of growth in agriculture in 2017?
Next Opening session of the House of Assembly