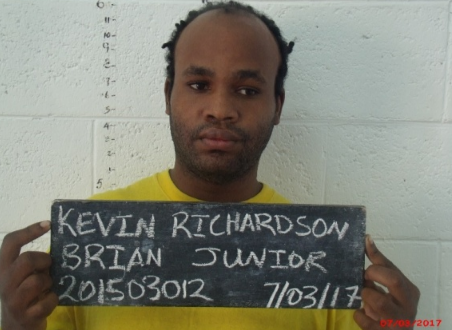 PRESS RELEASE – On Saturday July 8, 2017, inmate Kevin Brian Richardson escaped lawful custody from the St. Jude Hospital where has been admitted for the past two days.

On Thursday July 6, 2017, inmate Kevin Brian Richardson formerly from Beausejours, Gros Islet attempted to commit suicide by jumping from the upper tier of the residential unit at the Bordelais Correctional Facility (BCF) to the ground floor.

As a result, he sustained broken arm and head injuries. He was treated at the Facility’s Medical Unit and conveyed to the Dennery hospital for medical attention. He was subsequently referred to St. Jude Hospital for further management.

BCF effected the search protocol; and a team of Correctional Officers were immediately dispatched. Richardson was recaptured by BCF Officers on the St. Jude’s Highway, near the Victory Pentecostal Church within one hour (3:05 a.m.) of his escape on July 8, 2017.

He was transported back to the St. Jude Hospital under armed guard.

Kevin Richardson was admitted to the Bordelais Correctional Facility by virtue of a remand warrant for the offence of Fraud on February 25, 2017.

He is an inmate under psychiatric care at the Facility. Both matters (attempted suicide and escaping lawful custody) are under investigation.