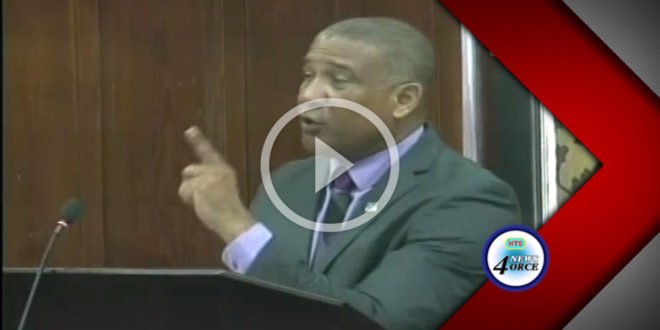 I want to join the Political Leader in thanking everyone who participated in and supported the protest march last Wednesday. The turnout and words of solidarity were evidence that Saint Lucians of all walks of life share a common apprehension about the direction which our country is taking. There is a strong sentiment that we cannot allow the division and decadence which is becoming a feature of our life to continue. We will fight and agitate for a stop to the victimisation, devaluation of our country and desecration of our heritage.

Today I am asked to focus on DSH and the information which was provided by the Prime Minister on Rick Wayne’s Talk. There is a simple way to summarise what took place  and it was reflected in Rick’s reaction to what the Prime Minister was saying – total confusion!!!! I have never seen Rick so confused, but of course, yet so accommodating. But it is clear from the exchanges that our calls and people’s cry for a better DSH are having the desired effect. There appears to be attempts to improve the deal. However, the continued misinformation, deceit and outright lies are making it so hard for the opposition and people of Saint Lucia to have any faith in what the Prime Minister and Government say. There is no trust, no credibility and no faith in the Prime Minister or the Government.

Remember though that when it was first announced that an agreement had been signed the Labour Party held a Press Conference and stated its position. It has two essential points. Firstly, that we support investment and creating jobs but if the Agreement had what we knew the developer wanted then it was a very bad deal for Saint Lucia. Secondly, we asked whether certain provisions were in the Agreement. There was no response! Then the document was leaked on a talk show and the public debate erupted. The Prime Minister and his PR people stated clearly that they were a transparent Government and they would have released the document anyway! Hon. Bradley Felix actually referred to the document and said he was against the buy-back clause. Invest Saint Lucia and Nicole McDonald presented a Fact Sheet to try to clear up the concerns of the public on the contents of the Agreements. That in itself was a disaster as it was an attempt to spin and justify what was included rather than allay the fears of the public. Their defence then was that the Agreements were just Framework Agreements and not definitive or final agreements. Never that it was not authentic.

If only the Prime Minister and the Government had handled this matter in a transparent manner.  Notwithstanding, we will continue to agitate because when changes are made and the deal gets better, Saint Lucia is the better for it. Sorry, Prime Minister, we are not opposing for opposing sake. We are patriots, everyone who marched is a patriot and our pressure is to make sure that you negotiate the best deal for Saint Lucia now and for future generations.

Today, let us examine the latest information that we have on the DSH project.

“Moderator: Can you comment on the veracity of the parts of the document that has been

circulating in the public domain.

Is that a statement that the document is not authentic?

“PM: The deal for the racetrack has been agreed to. The developer as I said has submitted all his EIA’s; so I am hoping that by next week, the DCA will have the approval and that we can commence the construction on that project.”

So I asked the question, was Clem Bobb asked to lie to the Governor General and to mislead Buckingham Palace?

Listen to the words of the Chairman of Invest Saint Lucia at the Press Conference to present their Fact Sheet.

“Reporter: Is the investor putting any capital upfront?

So we are financing a race track that will not make money because the developer wants a bait to attract other investors! And it gets worse, the Prime Minister admits there is construction cost and operating cost and the developer is upfronting and taking these on but will be reimbursed. In simple terms, the developer is building a race track and maintaining it knowing that it will be making a loss but he will get reimbursed from the sale of our passports!!! Why? Because he wants a bait, a cheese according to the Prime Minister to attract other investors!!!  We cannot accept that!

You will recall that the Prime Minister had denied that the DSH would be financed through the sale of our passports. It was said that he would be bringing investors for the project. At the signing of March 2017, investors were introduced – including the Prime Minister recognising Jack Lamb and looking forward to his presence in Saint Lucia.

What we have said and maintained, was that the developer had requested that the project be CIP financed. We went further and said that at a Gross Development Value of US$2.7billion and real investment level at US$300k, that means over 9000 applications and if an application facilitates three (3) persons then that’s over 27,000 passports. And we are stating today, that if the real estate option is removed, as the Prime Minister has stated will happen, and it will be all donations to be used by the Developer then it means US$2.7b divided by US$100k which gives 27,000 applications. And if each application facilitates three (3) persons, then we would have to give 81,000 passports over the life of the project!!! 81,000 passports. And please don’t listen to the Prime Minister, there is no longer a 500 persons per year cap on the CIP. This is a blatant deception

I can prove to you that the developer intended to finance the entire DSH project through CIP!!! We have a copy of the business plan which was first submitted by the developer. And I have explained before, the developer is requesting CIP allocations based on Gross Development Value which includes a profit margin. So when the developer says that he is putting in equity for phases he is actually using monies obtained through profits in earlier phases. So when the developer ‘upfronts’ as the Prime Minister stated, monies which will be obtained through loan financing, and be reimbursed later on by CIP when passports are sold, it is still our CIP monies that will be used! Now tell me, if the project is to be financed through CIP monies where will the monies from the investors go? Is it that the developer obtains profits from the sale of our passports then also obtain monies from investors?

Let me assist you. The Prime Minister has to come clean with Saint Lucians. From what the Prime Minister says it appears that Cabinet has already approved the Project but then it is realised that the law requires that CIP and Invest Saint Lucia must do all the due diligence and professional analysis and then provide a recommendation to Cabinet. But Cabinet has already approved it.

The Prime Minister says to Rick, and that was last Thursday, that there is no final deal as they are still negotiating, I quote:

“...how much monies from the CIP can go into any one component of the development, what they can use the monies for and what is it the government will get hold in collateral for that money going in. Those are all the things that we’re currently negotiating.”

This is the same Prime Minister who previously stated that Cabinet has approved the agreement.

The Prime Minister continues with Rick and I quote:

Yet, Cabinet has approved the Agreement according to the Prime Minister.

I can state to you today, and for fear that the PM Office says I lie, you can ask them: that Invest Saint Lucia, CIP Unit and CIP Board have all, all, rejected the DSH project. In their professional opinion, Cabinet should NOT approve this project.

You recall the Robert Ainsworth letter.

The same one that the Prime Minister, Hon. Guy Joseph and all the other Ministers have been quoting. Well, do you know there is a Teo Ah-King letter!! Never has the Prime Minister told the nation and people of Saint Lucia that he had written a letter to Mr. Teo making promises to him. It is the same reason why his action was to sign the Agreement which were presented to him, and then get Cabinet to approve, then try to negotiate his way out of the deep pit he had jumped into. I will not speculate why he wrote the letter nor why he signed the agreements so quickly after elections. I will let the Prime Minister tell you himself.

Members of the Press, in conclusion, the Prime Minister needs to come clean and show transparency on the DSH project. The Labour Party has insisted from day one that it is not against investment or jobs but we will not accept this deal as it is a bad deal. The Prime Minister continues to muddy the waters and create more confusion. Until there is sufficient clarity that will allow the opposition, the people of Saint Lucia and other social partners to make a proper assessment of the deal, then protest action will continue.